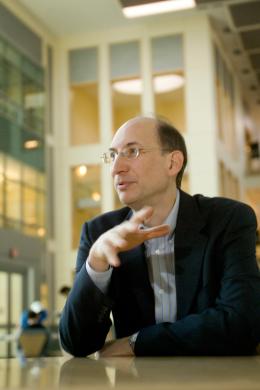 Breaking rules to change the way we live

When Dan Simpkins was a freshman at Cornell, he had two majors. “When I started as an undergraduate, I was a double major in engineering and pre-med.  As you can imagine, life wasn’t pretty. After one year I had to regroup,” says Simpkins. “Four hours of sleep per night was just not sustainable. That experience made me sit down and think about what was really important to me.”

Today, Simpkins is the founder and Chief Executive Officer of Hillcrest Labs, developers of the ‘Smart TV’ concept and global leader in software, hardware, and intellectual property for motion-enabled consumer electronics. Before Hillcrest, he founded SALIX Technologies, which was a leading developer of voice-over-internet services in the 1990s. Simpkins sold SALIX for $300 million in 2000.

When asked what experiences prepared him to lead several companies to wild success, interestingly Simpkins relates the story of two personal failures early in his academic and professional career. The first was his awful freshman year as an overextended double major.

The second happened early in his work career, when Simpkins was fired from a job. “Getting fired gave me the impetus and motivation to go out and start my own company.”  This theme of failure as an important teaching tool comes up again and again in conversation with Simpkins. When he quotes Winston Churchill’s famous lines, “Success is not final, failure is not fatal; it is the courage to continue that counts,” it is clear that Dan Simpkins places much stock in these words.

“From the earliest stages, I was curious about things and wanted to figure out how they worked,” says Simpkins B.S. ’80 EE and MEng ’81 EE. “Cornell gave me the intellectual tools to find the answers.” The answers he found, combined with a strong desire to know even more, have propelled Simpkins through a 30-year career on the leading edge of technological innovation. And Simpkins is not only a skilled engineer, he is also a gifted entrepreneur. “Entrepreneurship is neither a hobby nor a profession,” says Simpkins. “It is a passion. It is a way of seeing, and being seen by, the world. It is a willingness to change the paradigm of business and break the rules. Entrepreneurs aim to change the way we live.” The companies Simpkins has started have changed the way we communicate and the way we interact with our environment.

Simpkins makes it clear that being a gifted engineer does not automatically make a person a good leader or businessman.  “My grandparents had their own business,” says Simpkins. “I got to watch how businesses ran.  I got to see things from the perspective of a customer, but also from every perspective, end to end.” Simpkins learned valuable lessons from watching his grandparents, and then his father, run a business. “My father taught me that the customer is not always right; but when they are, you need to be able to react to it. He also taught me the value of treating employees right. You need to create impassioned employees.”

Simpkins believes it is just as important to know how people work as it is to know how things work.  While he didn’t graduate with that double major, he did take classes in both biology and cognitive psychology while at Cornell. “Observing the biological world helped me understand not only myself, but how people interact with each other and with the world,” says Simpkins. “I have tried to combine these skills in everything I have done in my professional career. Human-computer interactions are central.”

The more Simpkins talks, the clearer it becomes that he is about as far from the outdated stereotype of the engineer as a person can be. “You can learn business tools and accounting, but you can’t learn the more subtle lessons about how to treat a customer or an employee. You can’t acquire good business instincts in a classroom. A lot of the knowledge comes from psychology. We are wired to see, hear, and feel things a certain way and all these will relate to how we operate in the world.”

When asked if he is starting to think about retirement, Simpkins sounds almost insulted by the question; “The world has a lot of problems. We are not energy independent. There is a lot of poverty. We have an enormous environmental crisis looming. We have overharvested our oceans. There are a lot of problems and if you are intelligent and curious and punctilious, they lead you to explore other problems. There are too many problems for me to just go play golf.”

An indirect way Simpkins hopes to address some of these problems is through his support of entrepreneurship at Cornell. There are many young engineers at Cornell who are dreaming big and looking at the world’s problems as opportunities to create new technologies and new approaches to make the world a better place. Says Simpkins, “I am seeing some great new entrepreneurs emerge from Cornell Engineering. They give me a chance to give back . My business success gives me more freedom to spend time at Cornell and hopefully impart some of that entrepreneurial spirit.”