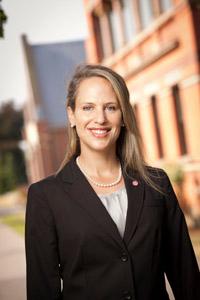 What do you do if the job you know would be perfect for you simply does not exist? You could take what comes along and daydream about what you would really like to be doing. Or, if you are Jen Baker '12 MBA, '13 MEng,  you could break the rules and simply create the position you want and then talk your way into it.

When Baker was 14 years old, she found herself on the campus of the United States Naval Academy in Annapolis, Md.  She was there with a friend to pick up her friend's sister for a weekend at home. Even though Baker lived just 30 miles away in Baltimore, she had never been to Annapolis. As she walked the grounds for the first time, it struck her that maybe she might want to attend. She got home the next day and mentioned the possibility to her dad, "and he just laughed," says Baker. "From that moment on my mind was made up.  I was going to the naval academy." Baker can laugh about it now, but she says her father is still a bit embarrassed whenever the story comes up.

Baker was tenacious about her desire to get into the naval academy and she made it happen. She graduated from Annapolis with distinction and has continued to go her own surprising way since. She has flown in the U.S. Navy, been a Civil Engineer Corps Officer, owned and managed a small business, taught high school math, coached lacrosse at both the high school and college levels, taught yoga, and worked for Intel. Oh, she has also earned two masters' degrees from Cornell , one in Aerospace engineering and one in business administration.

Upon completing her advanced degrees at Cornell, Baker was offered a plum job in industry, one that would have brought her closer to friends and family and paid well. But something held Baker back. She knew she had another dream—one that might never happen if she moved away from Ithaca to take the offer.

In her heart, Baker knew she would like someday to be the athletic director at a university. She also knew that taking the offer and moving from Cornell would have taken her away from her dream rather than toward it. "This is a big risk…but, you never know what is possible unless you ask," said Baker.  It is a huge step from volunteer assistant women's lacrosse coach to Athletic Director and the intermediate steps for Baker were not really clear. So, she did what she has always done: she charted her own path and invented a job for herself where none existed before.

Ever since she coached high school girls lacrosse at Cape Henry Collegiate School in Virginia, Baker has known the value of teaching leadership skills to athletes. "Sports give a person the chance to experiment with leadership skills in a controlled environment. They get to practice every day." Baker started to research ways to combine sports and leadership and quickly discovered that the Dartmouth College Athletic Department has an Assistant Athletic Director for Leadership.  Baker says it was a revelation: "Wait! This job exists?"

Her next step was to get Cornell Athletics to create something like this. The fact that the job did not yet exist did not dim Baker's hopes at all.  This is where her entrepreneurial streak came in handy. "It just felt right—in my gut I knew I had to try." Baker gathered the advice and support of her fellow assistant coaches as well as the head coach of the women's lacrosse team, Jenny Graap, and Cornell's head strength and conditioning coach, Tom Howley.  They thought it was a great idea.  Baker said to herself, "I am not leaving this campus until I at least float this idea."

And float it she did, right up the chain, meeting by meeting, to the top of Cornell Athletics.  She sat down for a one-on-one discussion with Cornell Athletic Director Andy Noel, who slowly warmed to the idea. In August, Noel announced that Cornell will start a Big Red Athletic Leadership Institute and Jen Baker will run it.

So this year you will find Baker working with athletes and coaches from all 36 of Cornell's intercollegiate sports teams.  Said Baker, "We need this here. I so believe that it makes a difference. The goal is to reach athletes and make them better at what they do. Not just now, but in life.  Having these leadership skills will allow them to differentiate themselves as Cornell grads and as people."

Baker has always been an unconventional person on an unconventional path. She has also always believed in herself. When asked what made her feel that she could create a job out of thin air and then convince an Athletic Director that he needed someone like her working here, Baker said, "I learned at Cornell to never be satisfied. You can be proud of your work and happy about what you have done. But don't be satisfied, because then you stop trying. I give Cornell credit for empowering me in that regard.  It's here that I learned to ask the question: What is possible?"