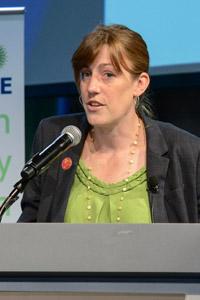 Breaking rules to improve the quality of life on our planet

Kristen Graf '01 BEE says of herself, "I have a strong set of personal rules, and where those butt up against the world's rules I think it is really important to break the world's rules. We need to question the status quo."  The questions Graf finds herself asking these days are: "Where do we get our energy from? and How can we change that?" As executive director of the nonprofit group Women of Wind Energy, Graf asks another question:  "How can we get more women into all parts of the energy sector?"

Graf believes that we rely heavily on fossil fuels because of institutional inertia and entrenched interests. This is exactly where her personal rules are running headlong into the world's rules. As an engineer who cares deeply about the world, she knows that there are better ways to make the energy we need. "For me, what ties this back to my engineering education at Cornell is in asking 'How does this work? Where is there room in the process for improvement?' Renewable energy, for me, is a sliver of hope in the face of a massive challenge. It's something we have to do."

As a seven-year-old, Graf was not asking herself any of those questions. She had a more immediate focus, which was doing all 50 of the 50 Simple Things Kids Can Do To Save The Earth listed in a book she and her sister had gotten from her parents. "We planted a tree; we recycled; we even put those 2-liter bottles in the toilet tank so we could save water on each flush. We did ALL of them. It was all rooted in a love of the outdoors and a realization that the things I do can affect the world." In high school Graf loved math and science and a teacher recommended that she could combine this love with her wish to make the world a better place by becoming an engineer.

"I didn't even know what an engineer was. Then I found out that my uncle was one."  Graf ended up at Cornell because "it was one of the few programs in the country at the time that had rigorous standards and focused on renewable energy. There were a lot of programs that focused on technology as the problem, but very few that zoomed in on how technology could be part of helpful changes."  Graf's parents were adamant that she choose a school that was not simply a tech school. She says she spent her years at Cornell "surrounded by great people doing great engineering things, but also by other people doing all sorts of amazing things in other fields."  This exposure helped Graf think about problems in a broader way. She took classes in City and Regional Planning, Business, Politics, and Sociology.

"My years as an engineering undergrad at Cornell made me wrestle with bigger, broader issues than just the technology of renewable energy. I realized that there is a much bigger picture to how technology exists in the world. Many things besides machinery are at play," says Graf. "There are political and utility level decisions as well as markets and economics. In many ways the technologies were far more advanced than I knew. I recognized there were much bigger obstacles at play, like policy, markets, and public perception."

Rather than giving up in the face of the complexity of the problem, Graf did what she says all Cornell engineers are taught to do. "I brought an engineering problem-solving approach to what I could do about renewable energy. Engineering at Cornell gives you an incredible toolset and mindset for how to approach challenges and problems." As she neared graduation from Cornell, Graf spent a lot of time working with staffers at Engineering Career Services, who she said "were incredibly helpful. They were amazing. They really cared a lot about helping me explore the things I loved. They were the ones who showed me that engineers could go in a hundred different directions."

Graf found a position that allowed her to use her engineering knowledge while advocating strongly for clean and renewable energy in the United States. She was hired by the Union of Concerned Scientists as a Program Assistant and then became the Clean Energy Program Coordinator and Research Associate. From there she moved to the Executive Directorship of Women of Wind Energy, where she has been since 2009.

Another "rule" Graf is working tenaciously to overturn is the fact that men make up 80% of the employees in the energy sector in The United States. Graf cites research done at MIT's Center for Collective Intelligence that found the problem-solving ability of a group depends on three factors: the average social perceptiveness of the group members, the evenness of conversational participation, and the number of women in the group. "It's simple to me. The more talents, ideas, backgrounds and diversity of approaches you have in the mix, the more likely you are to find solutions to problems. In the end, our ability to make great decisions depends on having more women in the legislatures and corporate board rooms and energy sector jobs and this is something I am working to change."