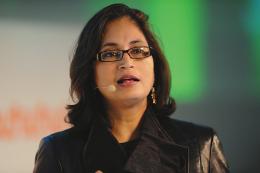 Padmasree Warrior M.S. ’84 ChemE has had a thirty-year career in the tech sector, rising to her current position as Chief Technology and Strategy Officer at Cisco Systems. This was not her original plan.  Her plan was to earn a master’s degree in chemical engineering at Cornell in the lab of her adviser Ferdinand Rodriguez, and then to continue on to a doctorate, also with Rodriguez. “He was always very flexible and encouraged me to push boundaries,” says Warrior. Her doctoral plan was derailed, and her future altered, simply by agreeing to do a favor for a friend.

“It was by sheer accident that I ended up working,” says Warrior. “I went to a job fair with a friend of mine who was finishing up her Ph.D. in chemical engineering. I just walked with her to keep her company.” At the job fair, one thing led to another, and before long Warrior had a job offer from Motorola. When she told Professor Rodriguez about it, she fully expected it would be a one-year position out in industry and that she would return with more focus for her research project. “He said, ‘Go for it. I’ll keep your project waiting for you.’ but I never went back. Every Christmas I would get a card from him saying ‘Hey, when are you coming back?’”

Warrior’s first job was at the Motorola facility in Arizona. She was one of only a few women working there at the time, but this was nothing new to her. While working toward her undergraduate chemical engineering degree at the prestigious Indian Institute of Technology in Delhi, Warrior was one of five women in an engineering cohort of 250 students. During her master’s study at Cornell, most of her chemical engineering classmates were male. At Cisco, a company with over $46 billion in revenues in 2013 and more than $8 billion in profits, the executive leadership team is 25 percent women, (which is more than double the average at the largest publicly traded Silicon Valley companies.)

Warrior’s long and successful career in the tech world has earned her widespread recognition, including commendations from the Women in Technology International Hall of Fame, the International Museum of Women, and Forbes Magazine, which placed her on the list of 15 Most Powerful Women in Technology for 2013. As Chief Technology and Strategy Officer at Cisco, Warrior helps shape the direction of technological research, innovation, and applications at the forefront of the digital world, including Cisco’s leading role in driving the Internet of Everything.

But she also uses her position to speak out about the need for more women in leadership roles in the tech sector. “I have been pleased to see more women in the STEM fields in schools and I think it’s trending in the right direction, but in the workforce progress is much slower,” says Warrior. When asked why it would be valuable to have more women in decision-making roles at technology companies, Warrior says “Technology, going forward, will become more blended. It is becoming a combination even in the products we build—it’s combining user experience  and user interface design with engineering.” She continues, “So you have to have a multidisciplinary approach, and I think women tend to be better at that. In the STEM fields women offer a very different perspective. We don’t think just of the technology, but also of the implications of the technology, the value of technology, the impact it will have on people’s lives, and the concerns about privacy. On all of these things women offer a very well-rounded perspective…”

When asked about the specific challenges women in leadership roles face in the tech world, Warrior says, “Women have to overcome more barriers. We don’t get as many passes as guys do. A woman in engineering and STEM fields almost has to out-perform her male peers to get recognized. It’s unfortunate, but that seems to be the norm.” Warrior sounds hopeful about the future for women in the tech sector. “As you see more women leaders in the field, that will change.” Nationally, women make up 18% of the students enrolled in undergraduate engineering degree programs. Cornell Engineering’s 2013 freshman class is 44% women. With leaders like Padmasree Warrior excelling in positions at the highest levels of the technology industry, the path for these female Cornell engineers to positions of real power may be a little easier.

Warrior has come a long way from her start in the United States, when she arrived at Cornell with an undergraduate engineering degree, $100.00 and a one-way ticket. She returns to Cornell at least twice a year now. Though these days she comes to campus for meetings of the Board of Trustees, where she was recently elected to a four-year term.