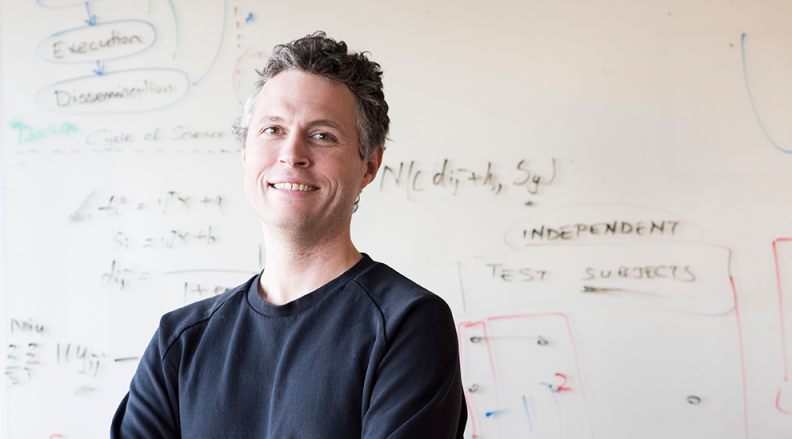 Mert Sabuncu has joined the faculty of the School of Electrical and Computer Engineering (ECE) and the Nancy E. and Peter C. Meinig School of Biomedical Engineering (BME) at Cornell. Sabuncu, who is interested in implementing innovative tools for analyzing biomedical images, was most recently in a faculty position at Harvard’s A.A. Martinos Center for Biomedical Imaging at Massachusetts General Hospital.

Sabuncu did not discover this interest in computer vision and image processing until he was an undergraduate at the Middle East Technical University in Ankara, Turkey. But it was clear long before college that Sabuncu would be a scientist. “Even as a child I was drawn to science and engineering,” says Sabuncu. “As a teenager, I knew that I wanted to be a scientist. I am a very curious person and I tend to pick a topic and devour it. I cannot imagine any other profession working for me as well as academia does.”

After earning his BS in electrical engineering, Sabuncu went to Princeton, where he pursued a Ph.D. in electrical engineering. At Princeton he worked on algorithms to process brain MRI scans. During his PhD, Sabuncu also interned with Siemens Corporate Research in Princeton, which exposed him to a range of biomedical applications. From Princeton, Sabuncu took a postdoctoral research position at MIT in the lab of Polina Golland in the Computer Science and Artificial Intelligence Laboratory (CSAIL). After three years at MIT, Sabuncu joined the faculty of Harvard’s A.A. Martinos Center for Biomedical Imaging at Massachusetts General Hospital.

Sabuncu is excited to be at Cornell. He sees opportunities for collaboration with many researchers already doing work here, including investigators in Ithaca studying neural systems of a diverse set of organisms and clinical radiologists at Weill Cornell Medical in NYC. These colleagues are creating interesting and novel data sets and Sabuncu says he is eager to help develop methods to handle, analyze, and learn from these data.

One early collaboration with BME professors Chris Schaffer and Nozomi Nishimura has proven successful. Sabuncu and colleagues have created a computer vision algorithm to automatically annotate data that had previously required tedious human effort. Speeding up this annotation process promises to unclog a bottleneck in the flow of data that was slowing down Schaffer and Nishamura’s work aimed at understanding Alzheimer’s disease more fully.

Sabuncu says one of the things he loves about coding is that it gives him tools to translate theoretical ideas into something that works in reality. “Software is suitable to exploring practical implications of theoretical frameworks,” says Sabuncu. “I have always been drawn to the theoretical…yet mathematical abstractions are (primarily) interesting in the way they relate to real-world problems.”

Sabuncu will have many chances to explore the practical implications of his theoretical frameworks in his position as a co-Principal Investigator in the NeuroNex hub created recently at Cornell through a $9 million grant from the National Science Foundation (NSF).  The center will develop new imaging tools to look deep into the brain. These tools will collect enormous amounts of data.

And it is Sabuncu’s task to develop novel algorithmic technology to make sense of, and exploit, this large-scale biomedical data.

When he is not teaching or working with very large data sets, Sabuncu enjoys reading biographies. “I am fascinated by the effect of chance in our lives,” says Sabuncu. “And by the fact that we seem to be hardwired to ignore it.”