Air quality benefits from electric vehicles could save thousands of lives

Max Zhang recalls returning to China for a wintertime visit with family and colleagues after living in the U.S. for 10 years. He was greeted right away by a familiar scent.

“I always associated that smell with winter since childhood,” he said, “but I never really asked myself – what is it? Later I came to realize it was basically sulfur dioxide.”

Zhang explained that coal-burning power plants surge in winter to meet the demand for heat in homes and businesses. “You just take [the smell] as given: this is winter,” he said.

>Air quality and associated health impacts have been a major concern in China over recent decades. Much of the air pollution comes from large-scale coal burning, but increasingly and especially in the largest urban areas, internal combustion engine vehicles (ICEVs) are to blame.

Zhang, a professor and researcher in the Sibley School of Mechanical and Aerospace Engineering at Cornell University, is the co-author of a recently-published study which shows that significantly boosting the number of electric vehicles (EVs) on Chinese roadways could prevent more than 17,000 premature deaths annually.

Published in Nature Sustainability, the study is titled “Air quality and health benefits from fleet electrification in China.” It points out that Chinese policymakers might have overlooked the human health impacts of EV adoption. “This is part of the goal of the paper,” Zhang says, “to raise awareness. Like, hey, there's a gap here, you're missing a big piece of the puzzle.”

Study co-lead author Shaojun Zhang, a former postdoctoral fellow of the Cornell Atkinson Center for Sustainability in Max Zhang’s group and now an assistant professor at Tsinghua University, agrees. “Our study can send a clear signal: do not forget the air quality and health benefits.”

The authors found that health benefits might actually outweigh the climate benefits of fleet electrification in China. While EVs are an essential part of addressing global climate change, the localized health effects especially in the Beijing–Tianjin–Hebei, Yangtze River Delta and Pearl River Delta regions, could be dramatic: “We estimate that 17,456 (95% CI: 10,656–22,160) premature deaths may be avoided in 2030 due to reduced long-term exposure to air pollution.” 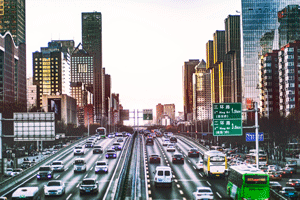 Shaojun expressed some surprise at these results. “We expected to see air quality benefits from fleet electrification based on our understanding of emissions patterns (both power and vehicles). However, we didn’t expect the monetized air quality/health benefits for EVs in China would be greater than the net-climate benefits.”

Over the years, many studies have noted effects of air pollution in China, including a possible link to cognitive decline, alarming numbers of premature deaths, and most recently “a significant link between air pollution and the risk of miscarriage” as reported by the New York Times.

>Health concerns however have not been the driving factor in Chinese incentives for EV deployment. “The Ministry of Industry and Information Technology (MIIT) is responsible for policymaking for the automotive industry and has had an important role in designing incentives to expedite EV development,” the study states. “The core objectives of the ministry are to support the domestic EV industry and market, reduce fossil fuel consumption and mitigate GHG (greenhouse gas) emissions.” The effects of air quality on population health might have been overlooked by policymakers.

Recently, economic factors have motivated the Chinese central government to end direct and indirect subsidies for electric vehicles by next year. But Max and Shaojun are hopeful that future incentives could come from municipal governments most impacted by air pollution, megacities such as Shenzhen, Guangzhou and Shanghai.

“Our research can lay a foundation to possibly introduce air quality and health benefits featuring incentives in the future,” Shaojun said. “We are working closely with several megacities in China and doing fine-grained assessment of fleet electrification there.”

“I really believe there is a synergy between community engagement and research,” Max said in an interview with Cornell Engineering magazine last year. “Engaging communities and addressing real-world problems has motivated me to conduct research that has societal impact.”

For Chinese citizens, the impact of his research could be life-saving.

Cornell to help boost US supply of critical energy minerals

A Cornell engineering professor will play a major role in a new federally funded project to increase the domestic supply of minerals needed to improve and sustain green energy. Read more about Cornell to help boost US supply of critical energy minerals