In historic shift, women comprise half of engineering undergrads 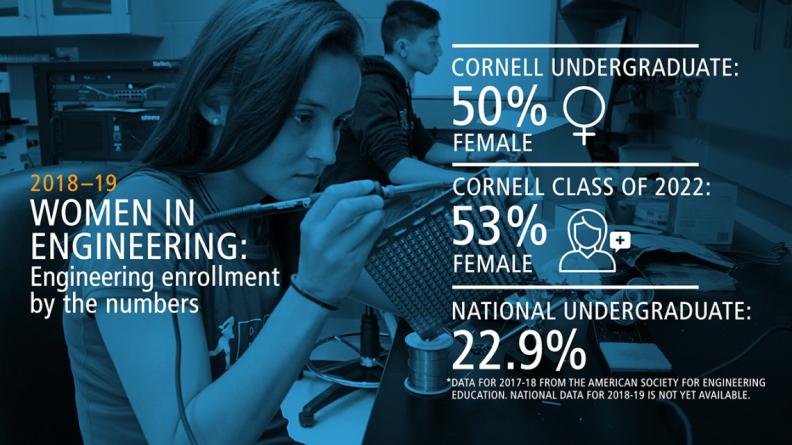 With the arrival of the Class of 2022, the College of Engineering now enrolls equal numbers of undergraduate women and men – the first engineering school of its size and stature to achieve this milestone.

Particular gains have been made in computer science, where female students once comprised a fraction of the department. In 2017-18, women accounted for 38 percent of computer science majors, who come from both the College of Engineering and the College of Arts and Sciences. Among this year’s incoming engineering class, 55 percent of students indicating an interest in the field are women.

Women are not only enrolling in engineering at Cornell, they’re succeeding. In the Class of 2018, men and women had average GPAs of 3.4, and the five-year graduation rate for both female and male undergraduates was 88 percent. Following decades of underrepresentation of women in engineering fields worldwide, Cornell’s numbers represent a historic shift.

“How could you make something like a phone or an app or a web landing page or a site without understanding half your audience?”

“Something really special is happening here,” said Lance Collins, the Joseph Silbert Dean of Engineering. “Women are going through the same rigorous training as the men and performing at exactly the same level. We’re debunking the notion that these fields are fundamentally male.”

Achieving gender equity at the College of Engineering was decades in the making, a product of advocacy at the university’s highest levels. Resources supported Diversity Programs in Engineering, and nimble admissions practices took quick advantage of cultural shifts to encourage promising, high-performing females to consider engineering at Cornell. The student-run Society of Women Engineers (SWE) and Women in Computing at Cornell (WICC) organizations foster a welcoming and supportive community.

Madisen Swallow ’18, works in the Chris Schaffer-Nozomi Nishimura lab, where she did research on Alzheimer’s disease. Women now comprise half of the undergraduates in the College of Engineering.

“It’s been a tremendous change, where not just the percentage of women but the absolute number of women has grown so dramatically,” said Greg Morrisett, dean of Computing and Information Science. “These fields are better with more diverse populations. Especially if you’re building products – how could you make something like a phone or an app or a web landing page or a site without understanding half your audience?”

The college has been making slow but steady progress since the early 2000s, but women’s admissions have accelerated in recent years. Summer workshops aimed at high school students, such as Diversity Programs in Engineering’s CURIE Academy for girls, have proven effective at reaching promising girls early and showing them what to expect at Cornell. The college’s short videos of Cornell undergraduate women describing their experiences are widely viewed, and many of the high school students who view them eventually apply, said Scott Campbell, director of engineering undergraduate admissions.

“We’re at a place now where a critical mass of women is improving the caliber of the education for every single person here,” he said. “Engineering is about solving challenging problems. We need people from multiple life experiences coming to the table to produce elegant solutions. If you don’t have that, you likely won’t find the best solution to any engineering problem.”

The college has invested in developing a support network. Women who have been admitted to the college are invited to Women in Engineering Day in April. Once enrolled, female students are eligible for stipends to attend the Grace Hopper Celebration of Women in Computing, the world’s largest gathering of female technologists; in 2018, 34 students received funds to attend.

“I think they’re such a positive force in making the major a more welcoming environment for everyone,” said Tardos, the Jacob Gould Schurman Professor of Computer Science. “There are lots and lots of these activities, but beyond this, they provide a community.”

“I’m really happy because [the stereotype of a ‘typical computer scientist’] is slowly changing, but we need to constantly make sure we’re making systematic changes in industry and academia.”

WICC co-president Nandita Mohan ’20 wasn’t sure she would major in computer science when she attended her first meeting.

“The first thing I noticed was how awesome the community was. WICC was all about bringing the community together and helping them succeed, and I found I related to a lot of people there,” she said. “A lot of women struggle with lower confidence, or they struggle with trying to fit the stereotype of a ‘typical’ computer scientist. I’m really happy because that stereotype is slowly changing, but we need to constantly make sure we’re making systematic changes in industry and academia.”

Although some other leading universities are also enrolling more women in engineering, higher education and industry generally lag far behind in diversifying their ranks. Collins said he hopes Cornell’s model can be applied in other settings to correct a persistent imbalance in gender as well as race.

“There needs to be commitment at the top, and there needs to be collaboration between admissions and programming to support students,” Collins said. “It’s very easy to work in a group in which everyone is homogenous. It’s not that challenging, but it’s also not that creative. In fact, creativity originates from the collision of different ideas and different perspectives. We want to create an environment in which those collisions can occur, and in order to do that we need to have a diverse population of students.”

An interdisciplinary research team led by Carla Gomes, professor of computing and information science, has developed Deep Reasoning Networks, which combine deep learning with an understanding of the... Read more about DRNets can solve Sudoku, speed scientific discovery

Researchers developed an algorithm that shows just how much more effective Spotify would be if it incorporated both likes and dislikes, in the style of platforms like Pandora. Read more about ‘Dislike’ button would improve Spotify’s recommendations