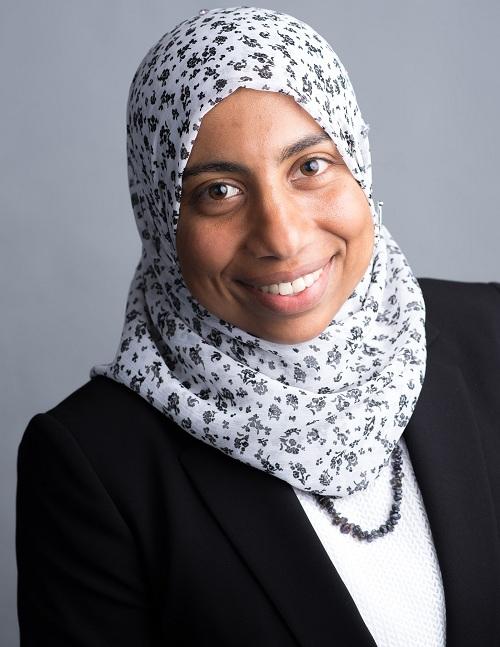 Growing up in Arizona, Amal El-Ghazaly used to take things apart. And her parents used to get a little upset with her because the things she took apart wouldn’t always work properly once she reassembled them. “But then they realized it was a thing they should encourage,” says El-Ghazaly. “My father is an electrical engineering professor and my mother has a computer science degree, so I think they recognized that I might be heading for a STEM career.”

El-Ghazaly certainly was heading for a STEM career. In July 2019 she joined the faculty of Cornell’s School of Electrical and Computer Engineering (ECE) as an assistant professor. El-Ghazaly’s research combines magnetism, ferroelectricity, and optics to create tunable, versatile systems for telecommunications, sensing, and actuation.

When she was 14 years old, El-Ghazaly’s family moved to Tennessee. In high school she was active in mathematics competitions and also ran track and cross-country competitively. Her interests were broad. When it came time to choose a college and a major, El-Ghazaly says she considered everything from architecture to zoology, eventually opting for electrical and computer engineering at Carnegie Mellon. “I also seriously considered going to Georgia Tech,” says El-Ghazaly, “but Carnegie Mellon felt like the right fit. It was much smaller than Georgia Tech and its athletics were Division 3, so I could still compete as a runner in college while focusing primarily on my academics.”

Just as El-Ghazaly was graduating from Carnegie Mellon with a B.S. and an M.S. in electrical engineering, the Great Recession hit and helped El-Ghazaly make up her mind to continue on to a Ph.D. rather than find a job in industry. She was already leaning toward earning a doctorate anyway due to an experience she had during her final year. “For my senior year capstone I had to make something by myself,” says El-Ghazaly. “Through the entire process I kept asking the professor a lot of questions. It helped me realize that there was still so much more I wanted to learn, so I applied to grad school.”

El-Ghazaly went to Stanford University, where she joined the lab of Professor Shan X. Wang. “I wanted to do magnetics research and when I applied to Stanford, he was the only one doing the sort of research I wanted to do,” says El-Ghazaly. The sort of work El-Ghazaly is talking about is in applied magnetic devices. El-Ghazaly was at Stanford for five years and earned her Ph.D. in electrical engineering. Her research at Stanford focused on radio frequency devices using magnetic and magnetoelectric thin-film composites for tunable wireless communications.

After Stanford, El-Ghazaly received a postdoctoral research fellowship at the University of California Berkeley. At Berkeley she explored new possibilities for ultrafast all-electrical switching of magnetic nanodots for faster and more efficient computer memories.

At Cornell, El-Ghazaly will continue her exploration of how to make tunable devices that would allow electronic systems for telecommunications, sensing, and actuation to be more versatile. “There are so many challenges when you look at the Internet of Things and at digital agriculture,” says El-Ghazaly. “We want to be able to communicate with many ‘things’ and sense many different things all at once, but the challenge is that our electronics are not infinitely scalable. The solution may involve increasing the number of devices in an electronic system, but not only will the electronics become too bulky, they will be consuming too much energy. An alternative solution is possibly making one compact device that can do many different things.”

“Cornell feels like such a great place for me to be,” says El-Ghazaly. “In terms of my research, it is a great fit at the departmental level and at the university level. There is a great agriculture school here and I am interested in applying my work to agricultural sensors. And on a personal level, everyone in the department feels so supportive. Even during my interview, it was clear that the questions being asked came from honest interest in my research. The faculty wanted to understand my work and really see how it might fit with the work already done here. As a result, the roundtable portion of the interview turned into more of a discussion about the possible markets my devices would be relevant for and by the time my visit was over I knew Cornell was the place for me.”

El-Ghazaly wants to create devices useful to agriculture, particularly in developing countries. In many places around the world there is a move toward consolidating production of commodity crops like sugarcane, cassava, and cacao by enlisting small farmers. El-Ghazaly is hoping to help these larger consolidated efforts better manage their resources and grow healthier crops through the use of sensors that can extract data from a large field and give valuable real-time, spatial information about crop conditions.

In the past, El-Ghazaly was heavily involved in outreach efforts to middle school and high school students in the San Francisco area. She hopes to do the same in the Ithaca area. In the fall semester of 2019 she will be teaching an Applied Magnetism class geared toward graduate students. To relax, El-Ghazaly still likes to run. She also bicycles and will sometimes pick up her guitar or cello.