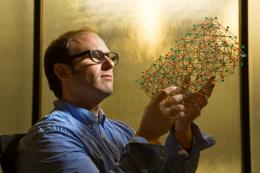 At the heart of Craig Fennie’s research at Cornell is one question: If this material existed, what properties would it have?

It may sound like a simple question, brief and straightforward. And it may even be a simple question for some basic elements joined in common pairings. But take a step or two away from Na + Cl and instead think about complex oxides and all assumptions of simplicity quickly fall away. “In complex oxides, the position of the atoms strongly influences the properties of the material,” says Fennie. “As a rule, physicists aren’t generally trained to care exactly where the atoms are—this is more often the realm of solid state chemistry.”

Fennie, a physicist by training, has learned to break that rule and to care very much exactly where the atoms are. His approach to developing a general set of chemically and physically intuitive mechanisms and design rules for complex materials combines microscopic models, symmetry principles, crystal chemistry, and first-principles computational techniques. When he is ready for some empirical input, he contacts experimentalists. There are colleagues at Cornell who can synthesize complex materials and then characterize their structures and properties. “Being at Cornell allows us to approach thinking about materials from all angles, “says Fennie. “There is a great atmosphere of collaboration here.”

This idea of developing a first-principles computational approach to discover new materials runs deep in Fennie’s work. In fact, one of his most highly cited academic papers, which was published while he was doing his graduate work at Rutgers in 2006, is called “Magnetic and electric phase control in epitaxial EuTiO3 from first principles.” Fennie sees his work as bridging the gap between theorists and experimentalists, and between condensed matter physics and solid-state chemistry. In trying to create a method for solving the full set of quantum mechanics problems for a given material, Fennie is creating a way to gain material-specific information for materials that do not yet exist.

Between earning his Ph.D. from Rutgers in 2006 and joining the faculty at Cornell in 2008, Fennie was the Nicholas Metropolis Fellow at the Center for Nanoscale Materials at Argonne National Laboratory in Illinois. “By the time I left Argonne, I had a book-worth of things that interested me,” says Fennie. “Some turned out to be stupid, but some turned out to be the best ideas I’ve had in my life.” Call it luck; call it instinct; call it skill; call it whatever you like, but Fennie has shown a knack for following the ideas that lead to productive places.

His dissertation won the Richard H. Plano Prize from Rutgers. He came to Cornell in 2008 and shortly after won a Young Investigator Award from the Army Research Office Materials Science Program, a Faculty Early Career Development Award from the National Science Foundation, and a Presidential Early Career Award for Scientists and Engineers (PECASE). In 2013 Fennie was chosen as a MacArthur Fellow in recognition of the insight and creativity that underlie his work. Most recently, Fennie was elected a Fellow of the American Physical Society.

“Getting tenure and winning the MacArthur have changed the nature of my work,” says Fennie. “They gave me the freedom to do something new. I reduced the size of my group a bit to give myself more time to think. And now I am asking new questions.” One question Fennie is now asking is focused on superconductors.

This shift in focus is certainly in keeping with the stated aims of the MacArthur Foundation. They stress that when they grant a Genius Award they are not honoring past achievements, but instead investing in future creative work. Their strategy statement makes this clear: “The MacArthur Fellows Program is intended to encourage people of outstanding talent to pursue their own creative, intellectual, and professional inclinations. They may use their fellowship to advance their expertise, engage in bold new work, or, if they wish, to change fields or alter the direction of their careers.”

Fennie’s work relies heavily on Density Functional Theory (DFT), which gives researchers tools to determine the properties of molecules with many electrons. “The pairing of electrons is at the heart of superconductivity, but the pairing mechanism is not well understood. This is a whole new class of problems for me to look at—I feel like I am back in grad school,” says Fennie with an excited smile. Fennie is working closely with Associate Professor Eun-Ah Kim of the physics department at Cornell, who is an expert in novel electron pairing mechanisms in superconductors. Fennie’s focus is on understanding how to go from Kim’s microscopic model to a real material in order to test their understanding.

Fennie does not yet know exactly where this new research direction will take him. But that is as it probably should be. If you already know what you are going to find before you start your research, you are probably not trying hard enough. When Fennie was early in his career he says a colleague told him “If the materials we want to make were easy, somebody would have already made them.” The same is most assuredly true of research. If the results are a foregone conclusion, somebody probably would have done the work by now.

“Based on the team we have, even if we fail at this effort, there is going to be something interesting that comes out of the work,” says Fennie. “New science will come out of it. The challenge for us is to recognize it. If you find something completely different than you were looking for, you better be paying attention so you don’t miss it.”