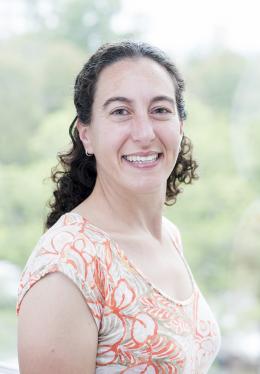 Ilana Brito does not shy away from the big questions. “I am early on in my career,” says Brito. “My approach is ‘big risk, big reward.’ I want to ask meaningful questions that push the current boundaries of what we know about gene transfer between bacterial species and about antibiotic resistance.” The field Brito is helping to build is called human microbiome research, and it holds much promise. Brito is specifically interested in the intersection between the microbiome and the recent rise of antibiotic-resistant bacteria, or so-called Superbugs.

The more researchers look closely at humans, the more they discover that we are not alone. In fact, we play host to an entire biome of commensal, symbiotic, and pathogenic microorganisms. Microbiome research--the study of the complex interplay between us and our resident microbes--is in its early stages.

Brito, assistant professor and Mong Family Sesquicentennial Faculty Fellow at Cornell’s Nancy E. and Peter C. Meinig School of Biomedical Engineering, is a trailblazer in this developing field. Brito, uses systems biology approaches to study the transmission of bacterial and genetic components of the human microbiome, which is the collection of trillions of microbes living in and on the human body.

These organisms that live on us and in our built environments share a feature that humans as a species do not have. The DNA in your cells is fairly static, with occasional mutations happening in individual cells over the course of your lifetime. Some of these mutations might confer an advantage and others could be deadly. Many happen without any noticeable effect on the individual—and certainly not on the species. With bacteria, the DNA is much more dynamic. It is common for bacteria to import stretches of genetic material (called “mobile genes”) from other organisms in their immediate neighborhood.  And because bacteria reproduce so quickly and travel easily with their human hosts, a genetic import that makes a bacterium somehow more harmful to humans or more resistant to antibiotics can be disastrous.

Brito wants to understand the basics behind this transfer of genetic information from one species to another. “Right now, we really don’t know how often genetic transfer happens between species in the human microbiome,” says Brito. “Having a better understanding of the process could someday lead to translational applications and maybe even the development of microbiome therapeutics.”

Brito grew up on Long Island, where her mother was a civil engineer who maintained the control tower and all facilities at LaGuardia Airport. (Her elementary school classmates loved this because they got to take some great field trips.) Brito’s mother, a trailblazer in her own regard, was the only female civil engineer in her class. She has been a significant role model throughout Brito’s life, starting at that early age.

Brito describes herself as “someone who liked to collect things. I was always very science-y.” Brito majored in biology and political science (as a joint degree) at Harvard. “I like topics that bridge the divide between my two areas of study,” says Brito. “And I always want to be doing something that has direct impact in people’s lives.”

Brito took a year off from school during her undergraduate studies and traveled to Mali in West Africa. During her time in Mali, she did field and lab research as part of a Fogarty International Center and National Institutes of Health (NIH) project on malaria. “That was a pivotal year for me,” says Brito. “It shaped a lot of what I have done since.”

What Brito has done since is to earn a Ph.D. in traditional genetics from MIT and then a postdoctoral research fellowship at the Earth Institute at Columbia University. “The Earth institute was great for me,” says Brito. “Their focus is on sustainability and their structure is fairly open-ended. They choose people they have confidence in and they give these people freedom to explore different fields.”

Brito took that freedom and ran with it. She turned her focus from pathogens to the organisms we live with. She created a project from scratch called the Fiji Community Microbiome Project. Brito traveled to small villages in the Pacific island nation of Fiji, where she surveyed 300 people about their family and social networks, their lifestyles, and their health histories to understand how bacteria that make up the microbiome are shared across families and friends. She collected microbiome samples from the body sites (including from the human GI tract) most exposed to exogenous bacteria. (Remember, Brito did describe herself as someone who likes to collect things.)

In this instance, there is a serious scientific purpose behind the collection. It is reasonable to think that daily exposure to microbes from the people and environment we are most exposed to would have an effect on the composition and function of our own microbiome. While reasonable to assume, this idea has not yet been addressed. Brito aims to answer some fundamental questions about the transmission of bacterial members of the human microbiome.

A surprising finding from Brito’s work was the global patterns of mobile genes. In some cases, organisms have acquired genes to match local flavors. In other cases, genes have become globe trotters. Importantly, these genes reflect lifestyle and behavior choices that we make and may contribute to longer-term health consequences.

Before Brito’s project in Fiji, nobody had tried to gather such a comprehensive collection of information and microbial samples from a developing world population. “I have always been interested in infectious disease,” says Brito. “The Earth Institute Fellowship gave me the chance to be creative in this sphere and extend concepts about infectious disease to the microbiome. Creativity is such an important part of the scientific process for me,” says Brito. “But one also needs good intuition, which develops from hard, focused effort”. These are strengths that Brito brings to the whole endeavor. Brito enjoyed the experience of international collaboration so much that she now has active projects in Nepal, Tanzania, and Guatemala, as well as a continuing presence in Fiji.

Now that she is at the Meinig School, Brito is tackling some of those big, meaningful questions that will help broaden the scope of microbiome research:

·What factors drive transmission of microbiome components, including specific genes?

·What are the consequences of this transmission?

The longer-term application of Brito’s basic research into genetic transmissibility within the human microbiome could include the engineering of microbial therapeutics and the delivery of genetic “cassettes” to the microbiome to enhance human health. Brito is thrilled to be at Cornell to do this work. “The boundaries between fields at Cornell are porous. As a researcher, having access to Weill Cornell Medical College and the Cornell Vet School and the other top-notch schools at Cornell is a huge advantage.”