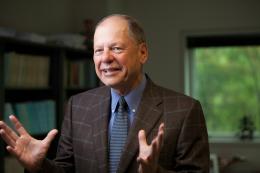 Before he even began his career as a Cornell Engineering professor, Jack Muckstadt was a self-professed rule breaker. It was 1972 and Muckstadt was in the United States Air Force. He was assigned to the headquarters of the Air Force Logistics Command at Wright-Patterson Air Force Base in Ohio. At the time, the Air Force was having a serious problem figuring out how many spare engines and spare engine parts to order. Their old method of determining the proper supply of spare engines and parts was not working in the operational environment the planes were being used in.

At the same time, a new weapons system, the F-15 fighter jet, was about to join Air Force operations. The F-15 had been designed with a focus on maintainability. The Pratt and Whitney engines had a modular design so that defective engines could be easily removed and replaced. Once removed, the defective module within the malfunctioning engine could be replaced or repaired quickly and the engine could go back into service. It was clear that the Air Force’s old method of determining the proper supply of engines and parts would not be up to the challenge this new modular design would demand.

So the Air Force found itself with a problem: how to figure out how many engines and modules to purchase. This is when Captain Jack Muckstadt broke the first rule of military service—NEVER volunteer. “I volunteered to help create a solution to the engine and module mix problem, and to do it quickly,” says Muckstadt, 43 years later in his office at Cornell’s Rhodes Hall. “Stupidity gave me the confidence that I could do it. And you know what? I actually solved the problem. The solution is still in use today. And this is basically what got me the job at Cornell.”

The job at Cornell Muckstadt is referring to was Professor of Operations Research and Information Engineering (ORIE). It is a job he held for 38 years until his retirement in 2012. Muckstadt is now an emeritus professor and holds the title of Acheson/Laibe Professor of Business Management and Leadership at ORIE. In his career at Cornell, Muckstadt published many influential academic papers in the field of supply chain management, served as school director for nine years, established the Cornell Manufacturing Engineering and Productivity Center, consulted with dozens of corporations, championed experiential learning, and acted as a role model for generations of students and faculty. During his long career, Muckstadt earned many professional accolades including awards for outstanding teaching. He was also named a fellow of the Institute for Operations Research and the Management Sciences (INFORMS) and a Weiss Presidential Fellow at Cornell.

“Professional awards mean a lot,” says Muckstadt, “but personal rewards over the years have meant even more. I felt honored that so many people came to the events on campus and in New York City to help celebrate my career and mark my retirement. I was touched that I had played a role in the lives of so many people. I never really thought that I was doing anything special. I just talked to students like real people and I gave them what I was able to give. It’s not that complicated. I really enjoyed my time at Cornell.”

Even though he is officially retired from Cornell, you can still find Muckstadt in his office in Rhodes Hall quite often. And if you do find him there, you are more likely than not to find him engaged with students, sharing his experiences and helping them think through vexing operational problems. Oh, and talking with them like real people.

As a young man, Ithaca and Cornell were not places Muckstadt thought about. Muckstadt grew up in the 1950s in Rochester, New York. “My parents were brought up during the Great Depression and there was not much of a history of going to college,” says Muckstadt. “My father worked for Eastman Kodak and when I was young I expected to go to college and then work for Kodak, just like so many other kids from Rochester.”

President John F. Kennedy intervened in the plan when he said during his inaugural address in 1961, “Ask not what your country can do for you. Ask what you can do for your country.” Jack Muckstadt took that exhortation seriously and joined the Air Force Reserve Officers Training Corps (ROTC) at the University of Rochester, where he was earning an undergraduate degree in mathematics. The Air Force saw promise in Muckstadt and sent him to the University of Michigan for a Master’s in mathematics, a Master’s in industrial administration, and a Ph.D. in industrial engineering.  It was these advanced degrees that led Muckstadt to Wright-Patterson Air Force Base and the violation of the first rule of life in the military.

“There is an axiom in the military,” says Muckstadt. “Never volunteer. Nevertheless, many have, and their lives have been altered because of this act. I was one of those who said ‘yes sir, I can do that,’ and my future was changed forever.” There are hundreds of Cornell Engineering graduates whose lives were also changed by Muckstadt’s decision, and his importance to ORIE and to the broader field of supply chain management cannot be overstated.