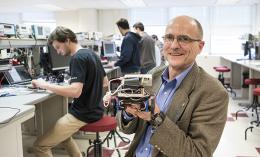 When a visitor walks into Joe Skovira’s office on the second floor of Cornell Engineering’s Phillips Hall, it is obvious right away that this guy is a tinkerer. If it were 1960, the parts strewn about the office might be vacuum tubes, a soldering iron, early transistors, or a homemade ham radio. But it is 2016 and Skovira’s office is instead littered with  laptop computers,  desktop computers,  keyboards, 4 Raspberry Pis, an Arduino or two, and boxes full of processors, controllers, and gadgets of all sorts.

Skovira, who is a Senior Lecturer in Cornell’s School of Electrical and Computer Engineering (ECE), seems happy as a pig in mud surrounded by these parts. And his excitement is contagious. Before we have even been properly introduced, Skovira is demonstrating what a particular controller can do.

Skovira was not always a teacher at Cornell. He had a full career with IBM before he was hired officially as a Senior Lecturer in ECE. Long before either IBM or Cornell, Skovira learned the basics of plumbing and electrical work by helping to maintain his Dad’s business on Long Island. “It was called Zoli’s and it was a college bar near Hofstra University,” says Skovira.

Skovira, propelled by his interest in all things electrical, went to the University of Notre Dame in South Bend, Indiana, where he earned a BS in Electrical Engineering. The Age of the Microprocessor was just beginning and Skovira was in on the ground floor, learning the basics of microprocessor controls and systems at Notre Dame. He was hired by IBM right out of school as they were making the switch from analog technology to microprocessors and controllers.

“IBM put me in their Printer Products Group and I learned the fundamentals of groups of computers,” says Skovira. “Then they paid for me to get my Master’s in Electrical Engineering at Syracuse and my Ph.D. from Cornell. I couldn’t say no to that.”

While studying at Cornell’s School of Electrical and Computer Engineering, Skovira’s advisor was Professor Jim Thorpe. “Jim gave me some valuable advice,” says Skovira almost 30 years later. “Jim said, ‘this Ph.D. is all you. You propose the project; you assemble the committee. Make it something you really want to do.’” Skovira worked with Cornell neurobiologist Robert Capranica to create a parallel processor that could analyze in real time the signal being generated by the activity of single units in the auditory system of the Tokay Gecko. “That project gave me some great experience,” says Skovira.

After earning his Ph.D., Skovira found himself right back at Cornell. Only this time he wasn’t working with geckos any more. And he was no longer in Phillips Hall. He was in Rhodes Hall and he was working as an IBM senior scientist helping to get the supercomputer at Cornell’s new Theory Center up and running. “At first there were 512 machines hooked up, but we could only get about half of them to work at once,” says Skovira. “A group of us at the Theory Center  were told in no uncertain terms that we better be able to make it work. We were able to adapt some new scheduler technology to work on the IBM machine and that solved the problem—we were all pretty relieved.”

Skovira spent 14 years working for IBM in Rhodes Hall. He stayed around long enough to be part of the evolution from the Theory Center to the Center for Advanced Computing.

Since 2010, Skovira has been involved in several ventures where he has been able to feed his inner tinkerer once again. He has done everything from helping to design and build faster baggage scanning equipment to helping Cornell develop its very popular arXiv application (pronounced like the word “archive”), which is an open-access online archive of research papers in the fields of Physics, Mathematics, Computer Science, Quantitative Biology, Quantitative Finance and Statistics. As of January, 2015 there were more than one million papers accessible on arXiv.org.

When the chance came in July of 2015 for Skovira to join the teaching staff of ECE, he was thrilled. “When Clif Pollock, (Director of the School of Electrical and Computer Engineering), let me know there was an opening for a full-time Senior Lecturer to teach a class on embedded operating systems, I jumped at the chance. Work designing the new class started immediately and class began five weeks later and I have been busy and loving every minute of it since.”

“This class is all labs and projects—there aren’t any tests,” says Skovira. As he says this his hand reaches out and picks up a two-wheeled robot from the table top. “Integration is growing so much and processors are getting more complicated—students need to work with them to see what they can do. I get very excited by this stuff and I want the students to feel the same.” The day after this conversation, if you happened to be walking by the room where Skovira teaches his class, (called Design with Embedded Operating Systems), and looked in the wall of windows you would have seen 25 or 30 students happily tinkering with wires, sensors, circuit boards, controllers, and all sorts of hardware.

All of them, including Skovira, seemed happy as could be.

To learn more about the projects Skovira and his students work on, click here.