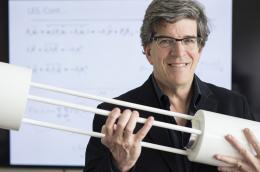 Building a bridge from raw data to decision makers

When John Albertson was starting his doctoral studies at UC-Davis in 1993, his advisor, Professor Marc Parlange, recommended he read two books to get a firm foundation in hydrology, fluid mechanics, and turbulence. Those books were written by Wilfried Brutsaert and John Lumley—both of whom were faculty members at Cornell Engineering. Parlange himself had studied with Brutsaert while earning his Ph.D. at Cornell. And now, 22 years later, Albertson has joined Cornell’s School of Civil and Environmental Engineering as a David Croll Fellow Professor.

“In some ways, it feels like things have come around full circle,” says Albertson. “I read Wilfried Brutsaert’s textbook when I was just starting; my Ph.D. Advisor was a student of his; and now I am joining the department in the wake of his retirement. There is a great legacy of excellent fundamental hydrology and fluid mechanics research at Cornell and now I get to be a part of it.”

Albertson comes to Cornell after 13 years in the Department of Civil and Environmental Engineering at Duke University, serving as department chair from 2009 to 2015. Before Duke, Alberston was on the faculty at the University of Virginia.

Underlying Albertson’s research is an effort to develop a comprehensive understanding of the exchange rates of mass, energy, and momentum between the land and atmosphere. Specific threads of Albertson’s research program are mobile sensing to identify fugitive methane emissions in oil and gas production regions; probabilistic prediction of wind energy production for improved grid integration; melding sensor data with models to improve understanding of air quality dynamics in urban areas; and the impacts of climate change and variability on water resources.

The interplay between land, sea, and atmosphere is incredibly complex. Albertson aims to bring clarity to some of what is happening as heat and energy make their way through this complex system. “We are in the midst of a sensor revolution,” says Albertson. “People are making small, low-cost sensors to measure all sorts of things. I want to provide the bridge from the raw data to the information needed in decision making. For example, we can use these data to build better models of water use to aid in increased food production. We will also be able to create block-by-block models of air quality for urban areas.”

Often the first step to making something better is to measure it. If we can measure it (hyper-local air quality, for example), we can start to understand why the numbers are the way the are. And if we can understand that, we can take steps to improve it. This simple idea underlies much of what John Albertson does.

Albertson is a strong believer in the idea that data can and should inform the choices people make. “If the data we collect can get to people, they can then vote with their feet,” says Albertson. “They can simply stop using areas that tend to be high in pollution.  When the public is acting on the data, then the policy makers will be motivated to respond.  I want to help build models that can account for all the factors that shape the air quality in cities block by block so that the data can affect behavior and policy decisions.”

Albertson is especially focused on fugitive methane leaks resulting from oil and gas production. Many people think of natural gas as a “bridge” fuel. Until cleaner alternative power sources can be integrated into the grid, natural gas will serve as a bridge between coal and cleaner alternatives such as wind and solar. Because methane is a much more potent greenhouse gas than carbon dioxide, (which is the main greenhouse gas produced by burning coal), this only holds true if the amount of methane escaping during the production and transportation of natural gas is below certain levels. Albertson is working to incorporate mobile and stationary sensors near natural gas well-pads, collection sites, and pipelines. The data he collects can then be used to quantify just how big a problem gas leaks are.  Moreover, these data can be used to support mitigation of the leaks.

“In the end, I want to help us get to the point where we design built environments, transportation systems, and energy infrastructure in a way that promotes healthy and vibrant communities,” says Albertson. I came to Cornell because it is like a candy store of intellectual elements. There is a long history here of groundbreaking collaborative work on some of the biggest problems we face. I feel a real responsibility to build on this.”