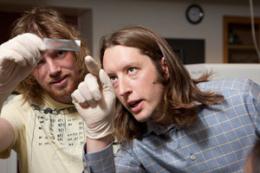 Julius Lucks says, "I have a habit of throwing myself into new situations where I don't know anything. I get excited because there is always so much to learn. But," he adds, "there is a real emotional cost to often being the dumbest in the group." It is unlikely anybody would accuse Lucks of being the dumbest in the group these days.  His work in the nascent field of synthetic biology has earned him numerous awards and honors in his short career, including an Office of Naval Research Young Investigator Award, a Sloan Research Fellowship, and an NIH New Innovator award in 2013.

Lucks, assistant professor of chemical and biomolecular engineering at Cornell, finds himself at the forefront of a field that is busy creating itself in front of our eyes. "I wouldn't say that we are breaking the rules of the field—none of us really know what the rules are yet and we are figuring them out."  Synthetic biologists want to create biological circuits that control the behavior of microorganisms and then use these cells to solve problems that strictly natural systems cannot.

Julius Lucks was raised on the chain of barrier islands off the coast of North Carolina called the Outer Banks. He says, "There was no science tradition in my family, but I latched on at an early age." According to Lucks, "when the local school started a Talented and Gifted Program for the 'geniuses' on the islands, there weren't enough of them. So I was one of the kids they brought in to fill up the class." In his junior and senior years of high school, Lucks was offered a spot at the North Carolina School of Science and Math. This is a public education boarding school focusing on STEM education. Lucks and his family accepted the offer and he got to study both organic and polymer chemistry while still in high school.

From there, he went to the University of North Carolina for a BS in chemistry, to Cambridge University for an M. Phil. in theoretical chemistry, to Harvard University for a Ph. D. in chemical physics, and then to the University of California at Berkeley, where he was a Miller Postdoctoral Fellow. You might notice that none of Lucks' degrees are in engineering. This fact is not lost on him. "When it was time to look for a job, I did not apply to any other engineering schools besides Cornell," says Lucks. "I am a physicist. But I am also an interdisciplinary, collaborative guy and Cornell has the infrastructure to promote collaboration."

To illustrate the point, Lucks mentions his work lately with John Lis from the Department of Molecular Biology and Genetics at Cornell and Chris Batten from Cornell's School of Electrical and Computer Engineering. "It is amazing to have access to people who know so much—it is like an awesome playground here for me," says Lucks, with a very satisfied grin. "Collaboration is in the water at Cornell. People believe in it and thrive on it here."

The short-term goal of all this collaboration is to find a better way to program cellular behavior. While at Berkeley, Lucks and his mentor Adam Arkin took a gamble.  They decided to focus on RNA as the molecule they would use to program cells. Most other researchers in the field were trying to use proteins to do the same thing. Their gamble paid off and by the end of his time at Berkeley, Lucks and Arkin had provided the field with proof of concept that RNAs could form genetic networks by themselves. "The long term goal for me," says Lucks, "is to use cells to construct very advanced materials.  Engineered cells will have enormous capabilities and will be completely sustainable."

Lucks believes that the field of synthetic biology is in a place where the field of computer science was in the 1950s. "This is the time of discovery for bioengineering," says Lucks. "We are asking the questions and we are doing it. We are going to learn some amazing things---and probably not what we think we'll learn." It turns out, Julius Lucks is still throwing himself into things he knows nothing about. But in this case, neither does anyone else. He and his collaborators are breaking new ground, developing new techniques, discovering new things about RNA, and, in the process, creating a new field.