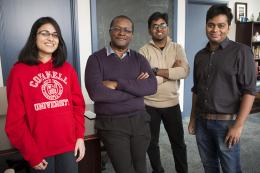 Sometimes, scientific breakthroughs happen by looking back and asking why.

In the 1970s researchers working for Exxon patented the first lithium-metal battery. In theory, this battery would be a huge step beyond the nickel-cadmium and zinc-carbon batteries then in use. It would be powerful and lightweight, enabling much smaller devices.

As is sometimes the case, the gap between the promise of a new technology and what it is actually able to deliver in the short run is vast. When these early lithium batteries were overcharged, they tended to ignite. With repeated charging and recharging, they succumbed to an electrodeposition instability that caused them to slowly fall apart. Nobody wanted batteries that caught fire or exhibited degraded performance over time, so researchers moved on to other battery designs, including today’s workhorse lithium-ion batteries. Lithium ion batteries replaced the lithium metal with a graphitic carbon material that offered only one-tenth of the capacity of their lithium metal precursors but turned out to be safer and longer-lived.

Six years ago, Lynden Archer, who is the William C. Hooey Director and James A. Friend Family Distinguished Professor in the Robert Frederick Smith School of Chemical and Biomolecular Engineering at Cornell, decided to revisit the idea of lithium-metal batteries. “I knew that the problem forty years ago was fundamental and of interfacial origins — metal dendrites would form and grow inside the batteries during the recharge and eventually overwhelm the cells,” says Archer in his comfortable corner office in Cornell’s Olin Hall. “I had the idea that maybe this dendrite problem could be solved by taking a fluid dynamics approach. I simply questioned the accepted story and started over. The real breakthrough we have made is realizing that everything depends on how you engineer the electrolyte.”

A battery is a device for getting electrically charged atoms to travel from one point to another. The points are called the electrodes, and the substance the charged atoms travel through is called the electrolyte. The original lithium-metal batteries used lithium perchlorate as the electrolyte, and it did not work so well. In the intervening years, the science of nanomaterials has revolutionized many parts of the manufacturing world. Archer saw that advances in nanoparticles might make lithium-metal batteries worth pursuing again.

“I threw the problem at my students and we all went at it,” say Archer. “I’ve been fortunate throughout my career to be surrounded by some of the brightest and most dedicated students at Cornell. It makes doing this sort of fundamental research truly enjoyable.” Archer and his students and collaborators have had significant success since they turned their focus to lithium-metal batteries. “Our contributions have been well received by researchers worldwide,” says Archer.

Archer’s progress with lithium-metal batteries is due in large part to his growing mastery of a group of nanomaterials called NOHMs. NOHMs are nanoscale organic hybrid materials formed by grafting short organic polymer chains or ionic liquids onto inorganic nanostructures. Both the inorganic root nanostructures and the grafted materials are nanoscale hybrid materials whose structures are carefully controlled through the production processes that create them. Under favorable conditions, the size and the spatial distribution of constituent parts can be controlled to create new hybrid materials with properties not seen in the constituent parts or in poorly prepared mixtures.

The electrolytic material in Archer’s new battery technology is a NOHM able to anchor a fraction of the negatively charged ions to slow-moving nanoparticles in an electrolyte, which prevents formation of anion depleted regions between the electrodes and the instability that leads to dendrites. To better understand how these electrolytes prevent dendrites from nucleating, Archer collaborates with Cornell Engineering colleagues from outside of the Smith School of Chemical and Biomolecular Engineering, where he is Department Director. Professors Lena Kourkoutis and David Muller in the School of Applied and Engineering Physics use electron microscopy to help Archer see inside lithium metal batteries to understand the nucleating events that lead to dendrites.

This research has implications beyond electrolyte composition. Archer hopes that in time his work will lead to a complete understanding of the nanoscale organic hybrid materials (NOHMs) at the heart of his electrolyte designs. “I got into chemical engineering at the age of eighteen not because I wanted to make existing chemicals on even larger scales,” says Archer. “I wanted to change how we use chemistry and physics on small scales to engineer new materials designed for new functions. I was always curious: if I truly understand processes at their most basic level, how will that change things? It is what I believe drives my passion for basic research.”

By looking backward and wondering “what would happen with lithium-metal batteries if we truly understood its failure modes?” Lynden Archer and his students are in the early stages of a revolution in electrochemical energy storage technologies.