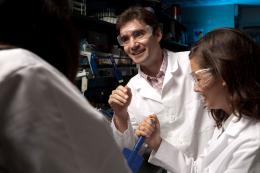 Matt DeLisa was not one of those kids who always knew he wanted to be an engineer. In second grade he did not take the remote control apart to see how it worked. While he enjoyed math and did well in science classes in high school, English and history were more to his liking. If there are any rules about how you become a professor in a highly-ranked College of Engineering, Matt DeLisa broke most of them.

Just take a look at the touchstone decisions in his early academic career: Most of the colleges he applied to were strictly liberal arts schools with no engineering programs. He eventually opted for the University of Connecticut not because they offered engineering degrees but because they had a premier NCAA Division I soccer program.  Sophomore year of college he looked ahead and saw that he was not going to be able to make a living playing soccer professionally after college, so he buckled down on his coursework and graduated with a B.S. in Chemical Engineering. He planned to get a job and go into industry right away. But the economy was reeling from a recession and the job market had collapsed, so DeLisa applied to graduate school to, in his words, “wait things out.”

But then a funny thing happened. In a graduate chemical engineering program at the University of Maryland, Matt DeLisa finally found his passion. “I quickly fell in love with the work I was doing,” says DeLisa. “I caught the proverbial research bug and it turned my world upside down. I was now fully committed to pursuing a career in academia.” As DeLisa tells the story, he sounds just as surprised today as he must have been back then.

It was the late 1990s and DeLisa’s advisor, Professor William Bentley, had a lab that was interested in biomanufacturing--the production of useful compounds using living organisms ranging from single-celled bacteria to intact larvae. “At the time, I was agnostic about what sort of biology I wanted to use to make things,” says DeLisa. “The ability to leverage simple E. coli bacteria as a cellular factory for producing valuable proteins such as human antibodies sounded really cool and so I opted for a project to do just that. Along the way, one of the things I quickly learned was that E. coli cells are really great at some things but not so good at others. One thing that natural E. coli bacteria cannot do, for example, is attach complex carbohydrates to proteins.”

This process, called glycosylation, is ubiquitous in eukaryotic cells but is completely absent in most prokaryotic cells, including the E. coli that DeLisa was using. “Glycosylation is a key ingredient in many proteins, including some that are used to prevent or treat human diseases. So equipping E. coli cells with this function would be game changing for the basic understanding of this important mechanism and also for drug development.” says DeLisa. “While I had no idea at that time how this feat could be accomplished, I was convinced that it had to be possible and that somebody would eventually figure out how to reprogram E. coli to make and attach complex carbohydrates to proteins.”

After receiving his Ph.D. from the University of Maryland in 2000, DeLisa went to the University of Texas at Austin as a Postdoctoral Associate for three years. While there he worked with Professor George Georgiou in the Department of Chemical Engineering. “I owe just about everything in my academic career to my two advisors, Professors Bentley and Georgiou,” says DeLisa. “They were not just advisors, they were mentors to me. And ironically, both of them earned degrees from Cornell Engineering.”

When DeLisa came to Cornell in 2003 he was drawn especially by the commitment to cross-disciplinary collaboration that grew more evident with every conversation he had. “The original position I applied for at Cornell was part of the University’s Genomics Initiative that sought to mesh physical sciences with life sciences,” says DeLisa. “From the earliest moments of the interview process it was clear that Cornell took collaboration across disciplines seriously. I really had the sense that the faculty here wanted to know what I was working on so they could find the places where we might work together and even break new ground. The culture of collaboration that I was introduced to throughout the interview process was a major factor in my decision to join the Cornell faculty.”

To make a long and technically challenging story short, in 2012—15 years after first putting the E.coli glycosylation challenge in the back of his mind—Matt DeLisa and his collaborators published a paper in the journal Nature Chemical Biology documenting their success at engineering the first eukaryotic protein glycosylation pathway in E. coli. “It felt great to finally do it,” says DeLisa. “My long-term interest is in developing next-generation therapeutic proteins and vaccines using biological machinery and this brings us a giant step closer to that goal.”

“Having an E. coli-based biomanufacturing process for making glycosylated proteins is not only a new route for making drugs, it is a new route to making drugs cheaper--perhaps even pennies per dose. This could have a real impact on a global scale.” To help hasten that impact, DeLisa has started a company called Glycobia, with the aim of rapidly commercializing new and affordable biopharmaceuticals with complex carbohydrate attachments that are designed from the bottom up for specific therapeutic applications.

Given the enormous potential of DeLisa’s research, he gives a somewhat surprising answer when asked what he would like to look back on in ten years’ time as his most valuable contribution. “Ultimately, the lifeblood of this whole scientific enterprise is the chain of mentorship and inspiration. I take that responsibility very seriously,” says DeLisa. “My advisors Bill Bentley and George Georgiou opened my eyes to the wonders of academic research and then opened doors for me as I began my life as a researcher.  My wife and my father--both world-class K-12 educators in my opinion--have inspired me to become a better teacher. My colleagues in Cornell Engineering have given me invaluable advice and guidance on everything from the tenure process to the entrepreneurial process. In my classroom and my lab I now have the opportunity to mentor and hopefully inspire just as so many others have done for me.”

DeLisa currently has 20 graduate students and post-docs in his lab, along with 12 undergraduates, and has even hosted a large number of high-school students over the years. “The science and its applications are what drive me, but just as motivational for me is the chance to mentor the next generation of engineers,” says DeLisa…Inspiring words from someone who went to grad school simply to “wait out” the recession.