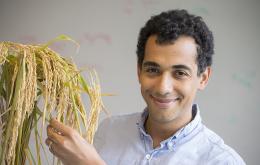 As a rule, the environmental costs of human activities were not high on the list of considerations when the industrial revolution began a few hundred years ago and then morphed into the digital age. Consequently, the air, soil, and water of the planet suffered grave harm over the centuries in many places. Matthew Reid would like to help tip the scales back in the direction of humans doing the Earth more good than harm--and he would like to use nature’s own tools and methods to remediate some of the damage humans have done.

Reid, who is an assistant professor of civil and environmental engineering at Cornell, had an inkling that he might be well-suited to graduate school when he made it through a two-year stint in the United States Peace Corps. “I found I was adaptable when I spent two years teaching chemistry in Tanzania,” says Reid from his office in Cornell’s Hollister Hall. “As a Peace Corps volunteer you have to able to deal with setbacks and think creatively about how to overcome them.  I also discovered that I really enjoyed teaching.  All of these are skills that I’ve found to be extremely useful for doing research.”

Reid received his undergraduate degree in chemistry from the University of Chicago before joining the Peace Corps. When he returned from Tanzania he first took a laboratory technician position with Columbia University’s Lamont-Doherty Earth Observatory. His chemical oceanography work there focused on taking measurements of dissolved gasses in ocean water. “It was a great experience for me,” says Reid. “I got to do fieldwork in interesting locations and learned to build machines to automate instrument control and data acquisition.”

After his stint at Lamont-Doherty, Reid decided to go to Princeton to earn his Ph.D. in Civil and Environmental Engineering. “While I was living in Karatu (in Tanzania) I developed an appreciation for the importance of water and engaged with engineering for the first time,” says Reid. “I began to look into the feasibility of rooftop rainwater collection.” A few years later, when he chose Princeton it was due in large part to the combination of strong water science and an opportunity to study the environmental policy implications of his engineering research.

Reid completed his doctorate in 2014 and then spent two years working as a postdoctoral scientist at the Swiss Federal Institute of Technology (EPFL) in Lausanne. His field work at EPFL focused on microbially-driven arsenic cycling in rice paddy soils. This is work Reid is continuing now that he is an assistant professor in Cornell’s School of Civil and Environmental Engineering.

“I’m interested in how we can harness naturally occurring biological processes in soil to improve water quality,” says Reid. “We know that we can use wetlands to ‘clean’ water, but right now it’s like a black box—we don’t know exactly what’s going on in there.” Reid is looking closely at how arsenic moves through rice paddy soils and into the rice. He is hoping to identify or create microbiological tools to understand the problem and then to remediate it.

In addition to his work on arsenic in rice, Reid studies nutrient dynamics and greenhouse gas emissions in on-site wastewater treatment systems, and characterizes coupled biological and physical-chemical controls on nutrients and other contaminants in engineered wetland soils. The thread tying Reid’s research together is the use of engineered and managed ecosystems as sustainable tools for water quality protection.

Reid decided to join the faculty at Cornell Engineering for several reasons. “Cornell combines the benefits of an Ivy League institution, where doing fundamental science is encouraged, with the land grant side, which is often focused on practical applications for the benefit of society,” says Reid. “Also, the students at Cornell are fantastic—both the undergrads and the graduate students. When I interviewed here I taught a class and I was so impressed by how engaged and dynamic the students were.”