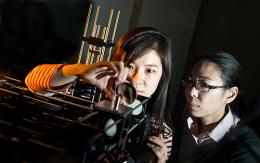 Studying disease at the cellular level in living creatures is very difficult. Researchers can often easily see the effects of disease on an animal’s behavior. And once an animal succumbs to a disease, researchers can perform an autopsy and see the physical effects of a neurodegenerative illness such as Alzheimer’s disease on the brain. But what if you want to observe what is happening in diseased or injured tissue at the cellular level as it happens in a living animal? These sorts of in vivo observations are incredibly hard to make.

Yet Nozomi Nishimura and her fellow researchers at Cornell Engineering are making just these sorts of observations.  They are creating ways to see inside of tissue without damaging what they are looking at. To see what they want to see, they have needed to build a new kind of microscope. Nishimura, who is an Assistant Professor in the Department of Biomedical Engineering at Cornell, has the right collection of skills to be in on the ground floor of this effort. She majored in Physics at Harvard, where she studied lasers with Professor Eric Mazur. She then went to the University of California at San Diego for her Doctorate. Her work there, with Professor David Kleinfeld, focused on blood flow in the brain, especially after small strokes.

During her Postdoctoral Fellowship in the lab of Cornell Engineering’s Professor Chris Schaffer, Nishimura was part of a group that pioneered the use of femtosecond laser ablations combined with two-photon excited fluorescence microscopy to study the effects of clotting and hemorrhaging on targeted blood vessels of the brain in a living organism. Clinical evidence has shown that microvascular lesions in the brain are an important factor in dementia in elderly people.

Being able to directly image specific microvessels and to watch the physiological consequences of these lesions has provided much insight into how the local vascular network of the brain responds to microvascular injuries. This is vital information that allows researchers to study the progression of neurodegenerative illness, such as Alzheimer’s disease. It also provides a platform for the evaluation of therapeutic treatments.

Nishimura is no longer a post doc at Cornell; she is now an assistant professor. She is taking what she has learned about imaging in the brain and applying it to other vital organs. “I like to say that when I was a post doc my focus was above the neck and now that I am a professor I have expanded my focus below the neck to include the heart and the intestines,” says Nishimura.

There are significant obstacles to overcome to clearly image a beating heart at the cellular level. Nishimura is collaborating with Professor Chris Xu, of Cornell’s Department of Applied and Engineering Physics (AEP), to tackle some of the challenges head-on. Xu and Nishimura are adapting multi-photon microscopy equipment to allow it to synchronize with image frames from a beating heart. “Cross-department work is essential for the work I want to do,” says Nishimura. “It just seems to happen at Cornell organically. I am working with people from AEP, the Cornell College of Veterinary Medicine, the Department of Electrical and Computer Engineering (ECE), and the Cornell Weill Medical Center.”

In addition to brain and heart studies, Nishimura is also studying the epithelial lining of the intestines in vivo in a new collaboration with Xiling Shen, of the School of Electrical and Computer Engineering at Cornell. “Normal intestine replaces the epithelial lining every 4 to 5 days,” says Nishimura. “We are looking at that process and also seeing how these cells respond to injury. This will give us insight into the interplay between normal regeneration and colorectal tumor growth.” The link joining Nishimura’s work in the brain, the heart, and the intestines is her ability to see how the body reacts to injury at the cellular level in a living creature. “Biologists have been able to learn a lot by studying cells in a culture or as part of a ‘lab on a chip,’” says Nishimura, “but they have not been able to fully recapitulate all the different cell types involved in disease, so in vivo studies are required.  We have the imaging tools to get at the actual dynamics and complexity of what is happening.”

When asked if she ever feels far from her initial study of physics and lasers, Nishimura shakes her head and says, “I don’t. I feel like I have been able to bring what I know to some very important questions. I have been through the experience of taking a new technology into the realms of biology a few times and I have to say, it is fun. I get to learn a whole new set of biological questions and I get to see processes no one has seen before. Instead of imaging things for other people, we internalize the biology and bring it into our lab.” With her work at Cornell Engineering, Nozomi Nishimura is making the invisible visible and unraveling the interaction of various physiological systems in several deadly diseases.