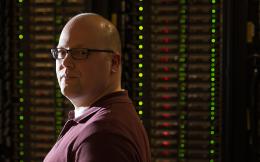 Patrick Reed, of the School of Civil and Environmental Engineering and the Department of Systems Engineering at Cornell, believes that decision-makers are far too often reactive when it comes to important decisions and policies. He would like to see them become proactive, instead. “If you are always reacting to events, you are not doing much to change the status quo,” says Reed. “We don’t believe in the status quo. We want to give people tools that help them better understand their systems and challenge themselves to explore innovative ideas.”

Reed says that when he was growing up he was always interested in how things work. “But it was more of an abstract interest.  I didn’t take things apart.  It was more theoretical.” Reed’s initial interest in the place where science and public policy intersect was anything but theoretical. “I was in St. Louis in 1993 when the Mississippi River was flooding,” remembers Reed. “I saw firsthand the decisions people had to make, and the consequences of those decisions.”

Much of the focus of Reed’s professional work, first at Penn State University from 2002 to 2013 and then at Cornell since 2013, has been on complex engineered systems and how to improve people’s awareness of risks and possibilities. “With any sort of complex policy decision there are tradeoffs,” explains Reed. “People always feel like someone is going to win and someone is going to lose.” Reed and his research partners are trying to create tools that allow for there to be some middle ground “where there can be more win/win solutions.”

One type of complex engineered system Reed is most familiar with is water systems, but the tools he and his team create are applicable to a broad range of engineering design problems. “Where there are complex engineered systems with potential for conflict, people want to know the tradeoff for each decision,” says Reed. “We create visual, model-based tools that let them play with possibilities.” There are currently tens of thousands of users of the software Reed and his team have created. “A defining trait of our work is that we help decision-makers quantify risks. We show them the tradeoffs explicitly so they can make informed decisions.”

As climate change starts to make its way into policy decisions, planners are asking for tools to help them account for many factors whose magnitude and importance are just not yet known. Local and regional water system managers are wondering how to manage for the risks associated with climate change. “When you look at problems like these it is essential that you know the science,” says Reed. “But it is just as important that you take a systems perspective. You need engineering, social science, financial, legal and environmental experts at the table, when real decisions are being made.”

A related complex engineered system Reed has taken a close look at lately is the existing array of space-based rainfall observation satellites currently in use. The system relies on ten satellites in orbit hundreds of miles above the Earth. These satellites collect rainfall data, which is then used to predict flooding. Reed led a team that included researchers from Princeton University and the Aerospace Corporation. The team found that the rainfall data collected by the satellites is incomplete and gives inadequate coverage to some areas of the world that are vulnerable to flooding. They also concluded that there is a need for greater coordination of satellite replacement between the many national and international entities currently placing weather satellites into orbit. The global rainfall satellite-measuring system is complex, with many stakeholders and competing priorities.

Accounting for all the variables and including the priorities of many stakeholders requires a LOT of computing power. So much so that Reed’s research group at Cornell is one of the single largest users of computing power in the country. For his work on remote global rainfall measurement, Reed and his team used the Blue Waters supercomputer at the University of Illinois at Urbana-Champaign. The amount of data they collected would have taken hundreds of years to process on standard desktop computers. Reed is so familiar with advanced computing that he was called to Congress to provide testimony at a Congressional briefing on high-performance computing in 2013.

Reed and his colleagues from the Aerospace Corporation were able to generalize some of their weather satellite findings, which led them to publish a paper in 2016 that provided computational innovations that allow engineers to quickly understand performance tradeoffs in the global satellite-based monitoring systems they design. Their work made it far easier for computers to evaluate competing satellite design options. Using their tools, computers can now do in computational hours what it used to take computational years to accomplish.

Reed’s awareness of the complexity facing engineers, systems designers, and policy-makers shows in his teaching. He believes that to prepare today’s engineers, he has to make them think about more than just the technical aspects of any problem. “Students are going to have to think about much more than engineering,” says Reed.  “In the real world, data is not free and interests are not well-defined.” Patrick Reed is doing his best to help decision-makers in the real world step out of the status quo and make well-informed decisions that are sustainable and that reduce conflict.