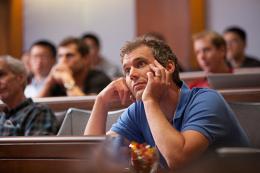 Every time a person, a company, a government, or any other entity makes a decision, they change the future. In that moment of deciding, an infinite number of paths are annihilated and another infinite number of paths are created. Peter Frazier, associate professor of operations research and information engineering, builds models to try to tame the chaos of these systems characterized by choices and possibilities cascading from earlier choices. His models are based on math and they exist to help decision-makers make better choices.

When asked if there is any place for instinct or intuition in his work, Frazier nods vigorously. “Oh yeah,” he says, “intuition is critical. Sometimes you have 80 different things you could put into your model and you need to have a good sense of where to start and how much weight to give each ingredient. And sometimes, you are simply wrong. It is good to experiment by building a model, and if it is going to fail, then find out fast, so you learn and your next iteration is better.” In addition to intuition, Frazier believes failure is another important ingredient in a good model. Failure helps you figure out where your model needs to be adjusted.

Frazier did not know that the field he is in even existed until he was deep into his 20s. “I learned about Operations Research (OR) as I was looking for a graduate program,” says Frazier. “In 2000, after I got my undergraduate degree, some friends and I started a company and it failed as the Dot Com bubble popped. After that I was employee #13 at another company that failed. And then I worked for NCR’s Teradata division and found it interesting, but something was still missing.”

At Teradata, Frazier had deadlines for the problems he was solving. “I had some really interesting problems to answer, but I never felt like I really had time to answer them right,” says Frazier. “I wanted a real intellectual challenge. I decided to go back to school to get a Ph.D. so I could spend my time getting at the right answers, not just the quick answers.” And the more Frazier learned about operations research, the more it sounded like just what he was looking for.

“Even as a child, I wanted to be a professor,” says Frazier. “I have always really wanted to understand things.” This thirst for understanding led Frazier from his hometown of Rhinebeck, NY to undergraduate Bachelor of Science degrees in Physics and Engineering and Applied Sciences from the California Institute of Technology in 2000. “I did research in a quantum optics lab, which was intellectually stimulating, but it was hard to see how it was connected to everyday life, to making things that help people,” says Frazier. “My Engineering and Applied Science degree, basically a Computer Science degree, was more relevant and still intellectually stimulating. I discovered there that I love to program—it’s super clean.”

What Frazier means by “super clean” becomes apparent after more conversation. “If you are a kid and you are interested in physics, all the examples and activities adults show you are all clean and perfect. They all add up just right,” says Frazier. “But the real world is not like that. It is messy and it is not always clear what is going on in a given situation.” Discovering operations research and its application of advanced analytical methods to make better decisions was a real revelation to Frazier. “OR is the perfect combination for me of math and the real world. It is fantastic to do something that has an effect in the world, and that helps regular people with the problems that they worry about.”

The real world problems Frazier and his graduate students try to solve are varied and complex, which is just the way he likes them. Frazier has worked with Yelp to build a software platform for improving websites and apps, which is also used by Netflix. He has worked with Uber to help make their operations better.  He has worked with IBM and Weill Cornell Medical College to design personalized medical testing procedures for patients with vascular disease. He has worked with other companies, like 3M, Jane Street Capital, and an Ithaca company called Nature Source Genetics, to address other difficult problems those companies face.

He has collaborated with researchers from Cornell’s Computer Science Department to examine a category of problems called “multi-armed bandit” problems. These problems are characterized by the need to allocate resources among competing possibilities while possessing only partial knowledge of the value of each possibility. As time passes the properties of each possibility become more apparent.

One line of research Frazier is most excited about is his work with chemists working on nanomaterials and drug discovery. Drug and materials experiments can be very expensive to run and the results are in no way guaranteed.  Frazier uses statistics and optimization to help scientists design experiments that will maximize the value of the information they can collect. Even though his PhD is in operations research, his background in physics has made it easier for Frazier to communicate across fields with biochemists, medicinal chemists, and materials scientists.  This, together with the power of his operations research methods, makes him a valuable collaborator in this biochemical research. “Based on mathematical models, I give guidance on which particular molecules might work best in a given experiment,” says Frazier. “Also, I can help determine which experiment from a list of several possibilities would be the best to run.”

So far, Frazier’s instinct has served him well. He has lived out his own advice. His first experiment involved starting a company. That failed, but gave him important information. The second experiment, at Teradata, brought him a step closer to his optimal answer. He was doing excellent work giving quick answers to complicated problems at Teradata. But still, he knew there was a better answer to be found.

His third experiment nailed it. He came to the field of operations research, and that choice opened a path to his current position at Cornell’s School of Operations Research and Information Engineering (ORIE). He came to the field out of a love for delving deeply into problems and discovering how things work. Connected integrally with this love is his wish to use his skills to actually have an impact on the world. And that is just what he is doing at Cornell Engineering.