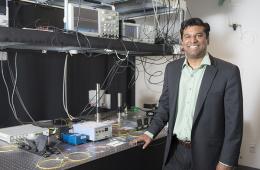 “New imaging capabilities can lead to new discoveries in biomedicine,” says Steve Adie, assistant professor in the Nancy E. and Peter C. Meinig School of Biomedical Engineering at Cornell. “My lab’s specialty is imaging science and our goal is to create new optical techniques and image formation paradigms that will have an impact across many research domains.” Adie is developing tools and methods for label-free 3D imaging of tissue structure and function in cell cultures and in vivo (in living tissue). These tools and methods can also be applied to imaging in human beings.

“Mechanobiology is an integral part of life,” says Adie, “and the imaging tools we need to fully explore it, in 3D, across time, and in vivo, just do not exist yet—these are what we are currently working on.” Adie’s goal is to break new ground and create some of the tools that will allow researchers to build a fuller understanding of the biophysical interactions that shape both normal and disease processes. For example, it is known that stem cell differentiation is influenced by mechanical properties in the biological environment of the stem cell. Adie sees an opportunity for optical coherence tomography (OCT) to clarify the exact role that local mechanical properties play in stem cell differentiation.

Using OCT, a beam of light is aimed at the tissue to be imaged. The small percentage of light that is not randomly scattered, but instead bounces directly back from the sub-surface area of interest, is collected and processed into a clear 3D image of a relatively thick sample without doing any harm to the cells. Adie is using OCT to do basic science and to push for instrumentation development that will allow new discoveries to make their way ‘from the bench to the bedside.’

“Life happens in 3D,” says Steve Adie. “As does cancer and other diseases. If research into cancer is performed only in petri dishes with 2D cell cultures, then we will be limited in what we can learn.” Adie and the members of his lab are developing computational imaging approaches for time-lapse imaging of biophysical processes at the single-cell level as well as large-scale volumetric imaging of collective (or emergent) behavior of cell populations. These new approaches are akin to being able to see a movie of something as opposed to a single snapshot.

As highlighted by Adie’s work, some of the most exciting and promising cancer research these days is being done by engineers. People don’t get cancer in a petri dish. So to better understand cancers, researchers have to figure out how to study the disease in settings that best mimic cancer’s usual physiological context. Even better than mimicking the physiological context for cancer would be studying tumor formation in vivo.

The ‘basic science’ part of what Adie does is to use OCT to study the role of mechanical properties in living tissue. An important finding by Adie’s collaborator, Cynthia Reinhart-King, is that individual cancer cells are able to exert far more force on their immediate vicinity than non-cancerous cells. It appears that the strength of the forces a cell can exert is proportional to that cell’s toxicity.

Applying their expertise in imaging science, Adie’s group has developed a new technique, traction force optical coherence microscopy (TF-OCM), to extend Reinhart-King’s findings beyond 2D, single-cell settings and into more physiologically-relevant 3D, collective cell populations. The vast majority of deaths attributed to cancer are not a result of the initial tumor, but instead are caused by metastasis. Cells from the original tumor migrate to other parts of the body, sometimes making it to essential organs and causing death.

Since metastasis is what makes cancer so deadly, it is essential to understand how individual cancer cells are able to force their way through the Extracellular Matrix (ECM) and into the circulatory and lymph systems. Adie works collaboratively with researchers from within the Meinig School and without to study the mechanical interactions between cells and their ECM. “Cornell is so strong in its existing research in basic sciences. When you add to that the collaborative interactions facilitated by the Physical Sciences Oncology Center (PSOC) and the new Cornell Neurotech initiative, it makes this an exciting place to be.”

Adie has traveled a long path to get to Cornell. He was born in India and moved with his family to Australia at the age of 12. He earned his B.Sc. and his Ph.D. from The University of Western Australia. While in graduate school, a student from the University of Illinois at Urbana-Champaign came to the lab Adie was in at Western Australia. The two hit it off. Adie returned the visit, and the two spent an intense week running experiments in the lab until 2 a.m. almost every night. After seven days he went back to Australia, but a published paper came out of that feverish week of research. Eventually, so did a post-doctoral research position with the Beckman Institute for Advanced Science and Technology at the University of Illinois at Urbana-Champaign.

In order to develop a more complete understanding of biophysical cell-ECM interactions, Adie’s group is also working on an instrument that combines focused sound waves and optical coherence elastography (OCE) to mechanically perturb a tissue sample with tightly focused sound waves and then to precisely image the corresponding displacements with OCT. In this way, he is mapping the mechanical properties of the ECM. Since the ECM is the “stuff” cells live in and is also the “stuff” cancer cells must work their way through in order to metastasize, understanding its mechanical properties is essential.

When combined with the insights into the forces cells exert on their ECM gathered by Adie’s traction force optical coherence microscopy (TF-OCM), researchers will be able to better understand the biophysical factors affecting tumor growth and cancer metastasis. But Adie is clear that it is not only cancer he is interested in. “In terms of making an impact, I want to develop new imaging capabilities and image formation paradigms that deepen our understanding of normal biological processes as well as disease. I’m hoping that biomedical scientists and researchers will want to come to us with all sorts of questions and to use our unique imaging capabilities to answer those questions.”

One long-term goal of Adie’s lab is to design and build portable systems that will allow doctors and diagnosticians to have clinically compatible OCT instruments for use in the doctor’s office, in the operating room, or at a patient’s bedside. The instruments Adie is working on could have applications far beyond the study of cancer and cancer metastasis. They could give insights into the process whereby stem cells change into other types of cells. They could also clarify the role mechanical forces play in the development of heart valve tissue. “Ten years out, I am hoping that we will have discovered new things about the role of biophysical factors in cancer, about stem-cell differentiation, and about how to do large-scale cellular imaging in the brain,” says Adie.

“Right now we are at the early stages but we are already having some great success.”