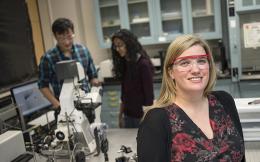 “One day as an undergrad at Lehigh I bopped into a professor’s office,” says Susan Daniel during a recent conversation in her office in Cornell Engineering’s Olin Hall. “I told him that I had some free time and wanted to get involved in research.” As luck would have it, the professor, Manoj Chaudhury, had just been struck by an idea he wanted to test out. He welcomed Daniel into his lab and set her to work documenting the movement of liquid drops on a surface with areas of unequal surface tension.

A general rule in academia is that there is an indeterminate period of time when you first enter a field when you pay your dues. You do the grunt work in the lab cleaning equipment, carefully weighing reactants, calibrating measuring devices, and coming in at 3 a.m. to collect time-sensitive data. It can be a few years before you get your name on a published paper.

Susan Daniel broke this rule right away. It turned out that Chaudhury’s idea produced some interesting and surprising results. The results were so interesting that the journal Science published their paper in 2001, before Daniel had even earned her Master’s degree in chemical engineering.

Fifteen years and 30 publications later, Daniel is now an associate professor in the Robert Frederick Smith School of Chemical and Biomolecular Engineering (CBE) at Cornell. Her doctoral research focused on extending Professor Chaudhury’s initial idea in some productive directions. She specialized in the area of surface science, studying the effect of surface wettability gradients on the motion of liquid droplets as they coalesce or become subject to vibrations. Had Daniel been one to play it safe, she probably could have continued with this sort of research as she started on her own independent research career.

Instead, Daniel decided to take a postdoctoral associate position in the chemistry department at Texas A&M University in College Station, TX. Her focus shifted to another surface entirely: cell membranes and other biological interfaces. Daniel’s work in Professor Paul Cremer’s lab at Texas A&M increased her technical capabilities, her knowledge of biological surfaces, and—importantly--her self-confidence.

“I proved something to myself in Texas,” says Daniel. “Before that, I felt a bit like an imposter. It was unclear to me if my success was due mostly to the good ideas of my advisor. My time at Texas A&M gave me confidence in my own ideas and my own work.” Daniel took this confidence with her to her first faculty position at Cornell in 2007.

To understand just how far Daniel had come to get to her position in Cornell’s Smith School of Chemical and Biomolecular Engineering, it is helpful to know where she started. Daniel was born in suburban Philadelphia. Her father was a German immigrant who left Europe and moved to Bucks County, Pennsylvania. “I grew up in a working class family and was the first to attend college,” says Daniel. “I was smart enough to realize that I needed to pick a major that would allow me to pay back my student loans; I just didn’t know at the time what it was going to be.”

Daniel had excelled in her high school chemistry class. She says of chemistry, “It’s the sort of thing you don’t know you’re good at until you do it.”  She finished high school with an intent to get a B.S. in chemistry at Lehigh University. “I had no thoughts at all about grad school when I started at Lehigh,” says Daniel. “I had a good undergraduate advisor who directed me to engineering and that is what eventually led me to go and knock on Manoj Chaudhury’s door.”

At several points while telling her story, Daniel emphasizes that she had good advisors and mentors all along the way. When asked what characterizes a good advisor, Daniel answers without hesitation: “A good advisor looks at your strengths and directs you to what is right for you—not to what would make you a mirror image of them.”

What has turned out to be right for Daniel is the study of interfaces. There are two main threads to her current research at Cornell. One is biological. She is primarily interested in understanding the roles of membrane lipids and protein-lipid interactions in biological function. Specifically, Daniel looks at exactly what is going on at the place where a virus interacts with a cell membrane. “I think of a virus as a biological machine that is good at introducing its genome into a cell,” says Daniel. “If we can learn how the virus does its job, then hijack the virus and use it to introduce what we want it to introduce into the cell, that could be very exciting for a lot of reasons.”

Daniel’s lab is one of the few in the world that examines single viruses as they bind to and transfer their genome across cell interfaces. Her group’s quantitative, engineering approach has already taught the virology community new things about virus entry that were difficult or impossible to measure without her team’s pioneering work. For example, her team has been able to measure the speed at which viral genomes are transferred out of a variety of viruses and virus-like particles, including influenza, coronavirus, and ebola.

A related aspect of Daniel’s biological work is her focus on the critical lipid-protein interactions that are necessary for healthy biological function. A cell membrane is comprised of many different proteins and biomolecules in a patchwork matrix of different lipid phases. Daniel and her team have invented an approach that allows them to control the spatial and temporal location of different lipid phases within a convenient platform. This set-up allows them to study the interactions between the various “species” of lipid. These interactions are thought to be responsible for regulating the overall function of the cell membrane.

The non-biological focus of Daniel’s work is rooted in her graduate work from long ago. She studies how liquid drops interact with chemically-patterned solid surfaces in an effort to understand how you can control drop shape and motion for various applications ranging from energy conservation and generation in outer space, to miniaturized droplet reactors for carrying out biological experiments.  This year, Daniel and her team are vying for a space on the International Space Station (ISS) to study drop interfaces in microgravity. Daniel says, “managing liquid droplets on condensers in heat exchangers is a big problem in space when you can’t rely on gravity to remove them. So we plan to study how drops coalesce in space. Microgravity allows us to look at larger length scales than can be examined on Earth. What we learn up there should benefit not only energy management in space, but on Earth as well.”

One other interface Daniel has taken a deep and abiding interest in is the intersection of gender and academia. When she first arrived at Cornell Engineering in 2007 some female CBE graduate students were just forming a group to provide support for each other. Daniel became involved as a group advisor right away. The chemical and biomolecular engineering graduate women’s group (CBE Women) is now thriving and Daniel is still actively involved. Just this year the group was awarded a $25,000 grant to support its dual missions of focusing on issues pertinent to female affiliates of the Smith School of Chemical and Biomolecular Engineering; and encouraging young girls to enter engineering through outreach.

Daniel is also part of a group of female faculty known as Women in Science and Engineering (WISE) at Cornell. WISE provides a forum for discussing ideas and concerns specific to female faculty, advocates strongly for women with the upper administration, and unites women across Cornell Engineering. “As a young assistant professor, I benefitted from the many positive interactions I had with this group and I believe WISE was a critical factor in my success at Cornell,” says Daniel. “Cultivating competent female faculty leadership will be a key factor in keeping Cornell a top-ranked college of engineering and at the forefront of positive societal change.”

It is clear by now, 17 years after knocking on a professor’s door and starting down the path to an engineering professorship, that Susan Daniel does not do anything halfway. She has been recognized nationally for the quality of her research and for her dedication to supporting and advocating for women in academia. She received an NSF CAREER Award in 2012 and the Denice Denton Emerging Leader Award from the Anita Borg Institute, also in 2012. When talking about her work today, it is clear that Daniel is still just as excited and motivated as she was 17 years ago. “Everything is subject to the same physical and chemical rules,” says Daniel, “but biology adds this extra layer of mystery. Ten years from now I want to be able to say that my work has shed light on some of the mystery. I want to provide fundamental insights into how the cell membrane behaves and how it accomplishes its many complex roles. It all comes down to what is going on at the interfaces.”