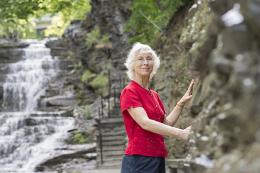 When Teresa Jordan looks west out the window of her office in Snee Hall, she has an excellent view of the slate roofing shingles atop the Cornell Law School across the street. Where others probably see a classic Ivy League building, Jordan sees the results of shale subjected to heat and pressure. Jordan, who is the J. Preston Levis Professor of Engineering in the Department of Earth and Atmospheric Sciences at Cornell, is a sedimentary geologist by training and she looks at the world differently than non-geologists do.

In some ways, this has always been true of Jordan. She grew up on a farm in Chautauqua County in far western New York State—about a quarter of a mile from Lake Erie. Her family grew grapes and her father also worked as a County Extension Agent for Cornell Cooperative Extension. “Out of the 60 people that graduated from my high school when I did, six went off to fight in Vietnam and six of us went to college,” says Jordan, as she looks out the window. “The rest stayed around Chautauqua County. But I wanted new experiences.”

Jordan went to Rensselaer Polytechnic Institute (RPI) in Troy, NY---about 350 miles from the family farm in Portland, NY. “I was assigned an advisor from the Geology Department,” says Jordan. “Growing up, I spent a lot of time outdoors. I knew what the rain and running water could do to soil. Geology seemed like a good fit for me.” In the field of geology, the path to employment has traditionally included earning a Master’s degree. Knowing herself, Jordan understood that a Master’s degree would not be enough. “I had to get a Ph.D. if I wanted to do what I wanted to do. I was very rebellious and I wanted to be the one calling the shots. I needed to get a Ph.D.”

Another bit of standard education advice for geologists is that, if you are going to pursue a doctorate, you should go to a school whose underlying geology is different from the area where you earned your undergraduate degree. Jordan saw the wisdom of this advice and went to Stanford for her doctoral studies. “My father had spent a sabbatical year at UC Davis and we all went with him” says Jordan. “So I had been to California and knew I would feel comfortable there. At Stanford, I got exposed to new rocks and landforms and had access to the collected wisdom of some of the best and brightest in the field.”

Jordan specialized in sedimentary geology, looking at rocks that form due to processes taking place on the Earth’s surface. To understand where on the Earth’s surface sedimentary rocks are likely to form, Jordan delved deeply into sub-surface phenomena. In places where one tectonic plate rides up over another, some land is lifted up and some sinks, forming depressions. These depressions are natural traps for water, sand and mud--the trapped particles eventually becoming sedimentary rocks.

After earning her Ph.D. at Stanford, Jordan took a research position at Cornell in 1979. In 1984, she joined the faculty of the Department of Earth and Atmospheric Sciences (EAS) at Cornell.

Jordan learned to see back through time in order to better understand the forces that led to the sedimentary rock layers she was working with in the western U.S., which went through this uplifting process roughly 80 million years ago. To test some of what she learned, Jordan found a place on the Earth’s surface where the same processes are happening today: the Andes mountain range of western South America.

As she was becoming an acknowledged expert in Andean sedimentary geology, concern about climate change and greenhouse gas emissions was growing nationally. As a small step toward seeking solutions, Jordan was part of a group of researchers given a grant by NYSERDA (New York State Energy Research and Development Authority) to look into the feasibility of sequestering carbon dioxide under layers of shale in Upstate New York. Meanwhile, shale gas extraction was quickly growing into a major energy source as well as a major point of contention. “As geologists we were almost taught to be dismissive of shale,” says Jordan. “I had to learn to overlook that. I was just one of the collective ignorant and I had to change that. There are only so many times you can say ‘none of us know anything about this.’”  “Fortunately I had a student from Turkey who needed a project related to marine sedimentary rocks, so we made that into an opportunity to learn more about shale, starting with the Marcellus shale right here in the Finger Lakes,” says Jordan. This effort to learn more about the shale underlying much of Upstate New York has led Jordan into a fertile area of research.

The statement of research interests on her official Cornell Engineering website says “Jordan and her team’s research foci is on finding more environmentally benign ways to meet society’s needs for energy using the natural laboratories of western South America and of New York, Pennsylvania, and West Virginia’s Paleozoic strata. Ongoing projects span from geothermal energy and shale properties in the Appalachian foreland basin, to groundwater resources and tectonic uplift of the northern Chile forearc.”

Jordan believes that scientists need to be part of the conversation about climate change. “We as a department have a role to play in questions of climate change and resource use,” she says. “We as a society have to decide, what are we going to do?” During our conversation, Jordan several times says the words “geology in the service of something bigger.” Looking ahead, Jordan has turned her considerable attention to the question of geothermal energy. If you drill down 3000 meters into the sedimentary layers below the Finger Lakes, you get to rock that is 80 degrees Celsius. This is not hot enough to boil water, but it is hot enough to cause burns to skin.

One of the guiding questions in Jordan’s research today is: is it practical to imagine that we can gather geothermal energy efficiently enough in the Finger Lakes to make it part of the answer to how we meet our energy needs? The jury is still out on this question, but Jordan believes she can, in the next five-to-ten years, have an answer to the question. As Jordan talks about her current work, her eyes stray occasionally to the window. It is easy to imagine that she is seeing something different than anyone else would see. Perhaps Jordan can see back to the tectonic upheavals that gave rise to the ancient Appalachians and the Marcellus shale that now underlies the entire region. Or maybe she is looking into the future, when her work, combined with the work of many others, has led to a cleaner, more sustainable energy future.