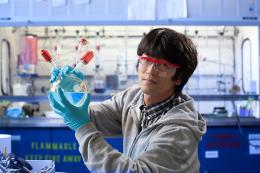 Postdoctoral Associate Hiroaki Sai Ph.D. ’13 Materials Science and Engineering recently had the distinction of appearing as first author on a paper published in the esteemed journal Science. “Yeah, that was a bit of an accident,” said Sai. “I was working on making a dense polymer film. And the usual rule with polymer films is if they are clear they are good.” The particular film Sai was looking at was cloudy. “When I looked at the film, it was opaque, so I thought it was no good.” But before disposing of the “bad” film, one of Sai’s colleagues in the lab, doctoral student Kwan W. Tan, suggested they take a closer look at what they had created.

In this particular case, taking a closer look did not mean holding the film closer to their faces or using a compound microscope. To examine their film more closely, they needed the help of the Cornell Center for Materials Research and the Cornell High Energy Synchrotron Source.  They used scanning electron microscopy, small-angle x-ray scattering, transmission electron tomography, and nanoscale x-ray computed tomography to really see and understand what they had made. “I learned a lot from the whole process,” says Sai. “Cornell is unique. There is no other place where we would have all the facilities and experts we needed on one campus.”

These various ways of looking showed Sai, Kwan W. Tan, and the other members of Professor Uli Wiesner’s research group that the film they had created broke the usual rules of dense polymer films. The film they had created was porous at both the nano- and micron-length scales, but they were not quite sure how they had done it. The size range of the pores is important because large pores allow materials to flow through at a good rate while coming into contact with a large surface area of the small pores, promoting whatever reaction the users hope to foster. The possible applications for films created with this constellation of pore sizes range from catalysis to bioengineering.

The Wiesner Group is not the first lab to have ever made a polymer film with this set of traits. Other researchers have attained a similar mix of pores at both the nano- and micro-length scales, but they have generally done this by first creating the film and then later etching the pores. The method Sai and his partners hit upon serendipitously is something new and potentially revolutionary. The pores were created as part of the process that created the film to begin with.

Once they saw what they had, they then had to replicate their results—which turned out to be much harder than it sounds.  They ran their initial experiment in February 2012 but by the summer they still had not managed to create the same sort of polymer film. “Eventually, we realized some water had gotten into one of the reagents and that is what stopped it from working,” says Sai with a bemused grin. “Experimental trial and error is still a very valuable approach.”

The members of the Wiesner Group are now able to reproduce the results any time they want. They have combined a few techniques already well-known to materials scientists, but in a new and creative way. “The best part about our process is its simplicity,” says Sai. “It is fair to assume someone else must have already looked at this method, but no one had.” Professor Wiesner has said, “It’s about as simple as it gets.” Their method for making hierarchical porous scaffolds from block copolymers can be generalized and the nanostructure can be fine-tuned simply by varying the temperature during an early step in the production process. By taking the time to look closely at something everyone else had passed by, Hiroaki Sai and his colleagues have moved science forward.

Neither catalysis nor bioengineering were on Hiroaki Sai’s mind when he was a child in Japan. The journey from his hometown near Yokohama to Ithaca, New York was initially powered by his desire to be an astronaut. “In 1992 the first astronaut from Japan flew in the space shuttle,” says Sai. “I was eight years old and I was hooked. A few years later, I saw the movie Apollo 13 and that really inspired me.” Sai even had the chance to meet a number of astronauts, including Jim Lovell, (the captain of Apollo 13), who told him that to become an astronaut, you need to study engineering. So Sai loaded his high school studies with math and science classes. He participated in the Chemistry Olympiad and scored highly. He ended up at Princeton, where he majored in Chemical Engineering. His advisor at Princeton, Ilhan Aksay, introduced Sai to the study of materials science.  Sai then came to Cornell because “I really liked Uli’s group when I visited. They were welcoming and very informative and they were doing work I wanted to be a part of.”

Sai is still interested in space. He says, “If I could participate in experiments on the International Space Station, that would be great for me.” He would like to find an academic position once he finishes his post-doctoral work at Cornell. “I like doing research. I love mentoring younger students. And I have a lot of questions I still need to answer.”