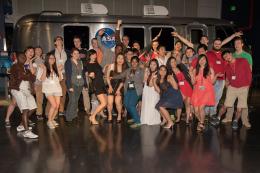 The lone genius inventor is a stereotype rooted deeply in the mythology of the industrialized world. You know the guy we’re talking about (and it is just about always a guy, in the stereotype): the engineer or scientist who toils away in his garage or his lab, perfecting that one crazy idea that will change the world.

Today, that is generally not how world-changing technologies are born. Sure, one person may have the initial idea for a new technology or a better way of doing something, but the follow through just about always involves a team of people who bring a real breadth of skills and knowledge to the endeavor. Rather than lament the loss of the lone genius in a workshop, (if indeed that ever really was how most things were invented), Systems Engineering at Cornell has combined with tech powerhouse Intel to sponsor a competition that celebrates the collaborative nature of innovation and design.

It is called the Intel-Cornell Cup and the competition grew out of ideas Cornell Systems Engineering field lecturer David Schneider presented before Intel Chief Technology Officer Justin Rattner in 2010. Rattner’s curiosity was piqued and Intel invited Schneider to create a competition. Many engineering competitions present all teams with one challenge and then judge the various solutions to the problem against each other. Schneider's idea for the Cornell Cup is revolutionary. He asks teams to first identify the problem they are trying to solve. Then they create an embedded systems solution to that problem using an Intel Atom microprocessor. Furthermore, teams develop a set of metrics whereby any solution to that particular problem could be judged to prove the value of their creations.

"So many of these high level engineering competitions present student teams with the same problem year after year," says Schneider. "The students can learn how to get really good at solving that one problem. But that is not what we wanted for Cornell Cup. We really wanted to up the educational value of the competition."  Schneider set out to create a competition with concrete learning objectives, an emphasis on innovation, low barriers to entry, real return value to the universities that send teams, and a chance to make a real difference in people's lives.

In the four years of competition thus far, student teams have developed an untethered upper body exoskeleton for use in physical rehabilitation, a BioBot robot with a built-in sensor to detect airborne viruses and bacteria safely, a prosthetic hand with fine-tuned grip strength abilities, a semi-autonomous amphibious search and rescue robot for use in natural disasters, and an automated hydroponic growing system, to name just a few of the more-than 60 projects created for the competition every year.  The Intel-Cornell Cup gives undergraduate and masters students from around the country a chance to work on technologies that can change people’s lives.

Students love the challenge. Sarad Dhungel, a computer engineering major from Howard University, said “I joined the competition because I wanted to make the best use of my engineering and technical education to solve a problem facing society.” Dhungel was the team leader for SLaTE8, which designed and built a prototype to translate American Sign Language into English text. “It was a great experience to see other teams’ sophisticated projects. To be part of such a great competition in such an amazing place was truly astonishing for me.”

In 2012-2014 the Intel-Cornell Cup was held at Disney World in Orlando, Florida. In 2015 the Intel-Cornell Cup moved to the NASA Kennedy Space Center, where there was greater contact with members of the general public as visitors passed through the Expo Center and were able to interact with all of the teams. Mark Barrasso, of the GrowBox team from Boston University, said, “It was inspiring. I made some great connections with passionate makers, engineers, and visitors. Also, speaking with NASA employees gave our team the idea of using our automatic plant-growing technology in space exploration.”

This year’s winning team, WALRUS Rover from Worcester Polytechnic Institute (WPI), designed and built an amphibious rover to help in post-disaster search and rescue operations.  They were inspired after watching the difficulties emergency personnel had in the wake of Hurricanes Katrina, Ike, and Sandy and the Japanese tsunami of 2011. “We wanted to build a rover that would give relief teams more information about the situation at hand, but also eliminate the danger of sending search parties into harsh, high-risk environments,” said T.J. Wilson, a robotics engineering master’s student from WPI. Wilson was especially impressed with the NASA Kennedy Space Center. “It was incredible to be next to so much inspiring engineering history as we demonstrated our project.”

One project that perhaps stole the show was the Disney-inspired Star Wars Pod Racing model theme park ride and virtual reality simulation created Cornell students (who do not compete, but instead  play host to the event). In addition to being a huge hit with attendees, the project was also a case study in how to perform validation and performance testing to enhance the design process. It will help future competition students create even more professional designs. Because of its educational value, this project was invited to be showcased at the White House-sponsored National Maker Faire in June.

The format for the Intel-Cornell Cup will be changing in 2016 to alternate an online version with a “real-world” version in successive years. This change will bring with it the opportunity to grow a larger on-line Maker community effort being developed by Cornell Engineering  that will be announced later this year. Thanks to the Cup, students from around the country can look forward to a challenging and inspiring competition that allows them to become part of the next wave of collaborative inventors striving to make the world a better place.