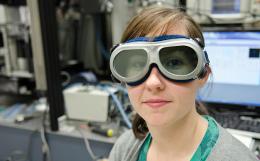 Breaking rules to have real impact

Megan Hill, senior in the Department of Materials Science and Engineering at Cornell, began to dream as a freshman that maybe someday before she graduated she would be able to get into the Cornell Nanoscale Science and Technology Facility (CNF) in Duffield Hall to do some research. “I came in thinking I wanted to be a Chem E, but then I took an Intro to Engineering class on Nanoscience and after that I was like, ‘I have to do that. I will do that before I leave here.” In her mind, “before I leave here” meant probably sometime during her senior year.

Turns out, she didn’t have to wait anywhere near that long. She took an introductory materials class and that led her to become a materials science major. “Materials allows for more of the physical chemistry approach I wanted than the other areas I was interested in,” says Hill. She joined Professor Mike Thompson’s lab group and was doing research in the CNF as a sophomore.

While it may sound surprising that a 19-year old student would have access to nanotechnology equipment that costs millions of dollars to build and operate, this sort of thing happens at Cornell Engineering fairly regularly. Many undergraduate engineering students choose Cornell for this very reason. In fact, almost half of the engineering undergraduates participate in some form of research before they graduate.

Mike Thompson, the MSE professor who welcomed Hill into his lab, said “Megan Hill was just a natural for semiconductor processing.  As a sophomore, her work fabricating microelectronic devices in the CNF was critical to work on understanding alternatives semiconductor materials.”   Thompson, who is always supportive of undergraduate researchers in his lab, went on to add, “In addition, undergraduates, and especially Megan, have an incredible drive and enthusiasm that infects the entire lab.  Inviting undergraduates into our research projects is definitely a win-win situation.  Students gain real lab experiences with an opportunity to apply their course learning to current problems, and my lab gains incredibly enthusiastic and talented researchers.”

Hill’s work in Thompson’s lab was supported by Cornell Engineering’s Undergraduate Research Program in the Office of Engineering Learning Initiatives. This program receives funding from the college as well as from various corporate and alumni sponsors. The corporate sponsor that directly funded Hill’s research into the III-V semiconductor InGaAs  (indium gallium arsenide) was the Semiconductor Research Corporation Education Alliance (SRCEA) with support from the Intel Foundation.

Lisa Schneider-Bentley, Director of Engineering Learning Initiatives at Cornell, is a firm believer in the importance of exposing undergraduates to high-level, relevant research. “For so many of our students, the opportunity to engage in the process of research and discovery, together with faculty members working to advance knowledge at the cutting-edges of their fields, is transformative,” says Schneider-Bentley. “ Suddenly, they are not only witnessing the application of the engineering principles they’ve learned in the classroom, but they are now playing a part in extending those principles into new terrain, beyond what is already known.”

Hill did not really know anything about Cornell Engineering and its focus on undergraduate research when she applied as a senior in high school. “The main reason I applied initially is because they waived the application fee,” says Hill. “When a friend of mine asked where I got in and I said ‘Cornell,’ he said, ‘That’s an Ivy League school, isn’t it?’” Hill had to Google it to find out, and when she did she was surprised to learn that not only is Cornell an Ivy League school, but Cornell Engineering is one of the best engineering schools in the country. She came to visit during a Diversity Hosting Weekend and decided Cornell was the place for her.

Hill was always good at science and math classes in elementary school and high school, and her godfather was an electrical engineer. But it wasn’t this connection that made her want to be an engineer. It was something else entirely. “Roller Coaster Tycoon is what made me want to be an engineer,” says Hill with a smile. Growing up in Missouri, Hill used to play the video game called Roller Coaster Tycoon, where you build and manage your own theme park. “Because of that game, I wanted to build roller coasters for a living,” says Hill, “and that meant being an engineer.”

Even though she knew she wanted to get an engineering degree in college, Hill did not limit herself to strictly technical subjects in high school. “I went to the high school that I went to because it offered the International Baccalaureate Program. And when I was there I also did music and theater,” says Hill. At Cornell she is not involved in theater, but she does still occasionally pick up her ukulele and play.

She also participates in research and goes to conferences. As a junior, Hill attended the Semiconductor Research Corporation’s annual TECHCON, at which she won second prize for undergraduate research poster. This year, she went as a senior and her poster won the Best Poster in Session prize. “One of the primary reasons I went,” says Hill, “is I want to stay in the semiconductor industry when I graduate. It is a very enjoyable conference because it is what I want to do. I did not think my poster would win—I was mostly there to get feedback.”  Hill’s poster was based on her research with Thompson into a process called Laser Spike Annealing. Their goal for the project was to establish the parameter space for ongoing studies of dopant activation and deactivation in indium gallium arsenide—a semiconductor used in electronics and optoelectronics.

Hill will graduate from Cornell Engineering in the spring of 2015. While she no longer wants to build roller coasters for a living, she does still want to be an engineer. “I am applying to several Ph.D. programs,” says Hill. Schneider-Bentley likes Hill’s chances for graduate school. “With Professor Thompson’s mentorship, funding support from SRCEA and Intel, and her own passion and dedication, Megan Hill has taken full advantage of this opportunity, and has already impacted the progress of her research group and her field. With this foundation, I am sure she will have her choice of excellent graduate programs, and really, the sky’s the limit, as she continues in her career from here!”