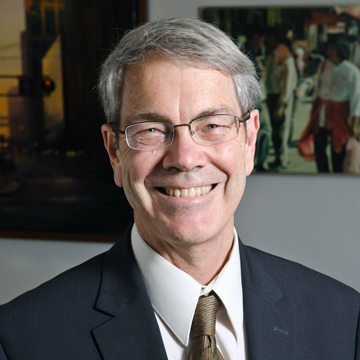 Pollock was an NRC/NBS postdoctoral Fellow at the National Bureau of Standards in Boulder, CO where he participated in the development of a frequency chain that led to the adoption of a new international standard for the meter. He joined the Faculty at Cornell in 1983, where he is the Ilda and Charles Lee Professor of Engineering. He maintains a research group of 3-4 graduate students, and is actively pursuing new solid state lasers for the infrared, and high power femtosecond pulse generation. He served as director of the School of Electrical and Computer Engineering from 2014-2018 and from 2000-2007.

My major research focus has been in tunable lasers, generation of ultrashort optical pulses, and the design of optical waveguide devices. We developed a number of broadly tunable near infrared lasers based on color centers and on Chromium-doped materials, explored new materials such as composite optical lasers, and developed methods for using the large bandwidth of these lasers to make femtosecond pulses. Current research is directed at femtosecond-duration pulses of tunable radiation, novel infrared laser sources, and LED lighting.

I have recently been teaching the introductory circuits course, ECE 2100, and the senior-level laser course, ECE 4300. I expect to remain in those roles, but am looking at a new Intro course that provides a comprehensive view of ECE.

I served as director of the School of Electrical and Computer Engineering from 2014-2018 and from 2000-2007, and spent a lot of time working on school issues such as hiring good faculty and identifying strategic directions. I am a topical editor for Optics Letters, a leading journal for laser research.