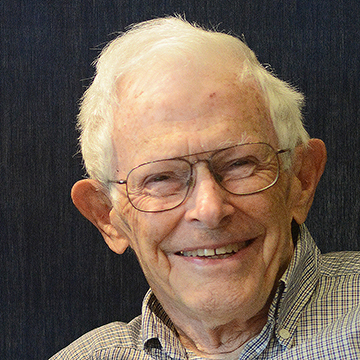 Jack Booker joined the Cornell faculty after completing his doctorate, and has since worked there in the area of mechanical systems and design, specializing in the computational analysis of fluid film lubrication. He spent a sabbatical leave in 1967-68 as a visiting engineer at the Glacier Metal Company in Wembley, England, and as a Ford Foundation engineering resident at IBM in San Jose, California. In 1974-75 he was a senior visiting fellow of the Science Research Council at Leeds University in England, and a visiting fellow at Twente University of Technology in The Netherlands.

He returned to The Netherlands and England in 1982-83 as a Fulbright fellow at Eindhoven University of Technology and a visiting professor at Durham University. He was a distinguished visiting professor at Colorado State University in 1988-89, the Hawker-Siddeley visiting fellow at Durham University in 1996, and an academic visitor at Oxford University in 1999. Booker's papers on the dynamics of bearing systems brought him the Henry Hess Award of the American Society of Mechanical Engineers (ASME), as well as the Starley Premium Prize and the BP Oil Tribology Award of the Institution of Mechanical Engineers (IMechE). He is a fellow of both the ASME and the IMechE and has been an associate editor of both the ASME Journal of Lubrication Technology and the STLE Tribology Transactions. He is registered as a Chartered Engineer by the Engineering Council (UK).

The dynamics of bearing systems lubricated by fluid films provides the central problems for our research program. Major objectives are the development of both qualitative understanding and quantitative analyses applicable to the design of these systems. A concern for "real-world" complexity has been characteristic of this work, which has usually required extensive computational effort.

Earlier work on the dynamics of isolated journal bearings resulted in a uniquely efficient "mobility method" of analysis, now widely used by industry in the design of engine bearings.

Studies of the dynamics of more complex bearing, shaft, and housing systems (in both rotating and reciprocating machinery) have combined nonlinear simulation and/or locally-linearized analysis with automated modeling of the structural components of a system.

Application of the finite element method to the detailed study of fluid film behavior has resulted in a novel and physically intuitive direct approach, together with a more powerful indirect, or variational, approach. Although computationally intensive it is the basis for much of our present work.

Current research efforts are mainly directed at several real-world complications: structural compliance, geometrical irregularity, and lubricant cavitation. Such departures from ideal conditions can be local or global in scale, and can have profound and unexpected effects (both beneficial and harmful) on friction and durability. Thus, quantitative treatment of these complications has considerable practical value in a wide range of applications, from automotive engine bearings to artificial human joints.