What is Solar Noon?

The inclination of the Earth with respect to the main plane of the Solar System along with the slight ellipticity of the Earth's orbit conspire to render the Sun's daily culmination (its maximum height above the horizon), or Solar Noon, to seldom correspond exactly with the noon reckoned on our clocks and watches. This fact alone allows us to ponder the remarkable chain of astronomical discoveries, the bold confidence of our ancestors, who chose to risk years-long sea voyages, along with the utter commonplace nature and astonishing accuracy of our watches, clocks, and calendars.

The difference between Solar Noon and standard clock noon varies throughout the year by a quarter of an hour or more and is referred to as the "equation of time." In this usage, "equation" means "the setting equal" or the "adjustment" of time. With Rhodes Hall at 42.5° West longitude, over a degree of longitude east of the Eastern Time Zone's meridian at 75° West, solar time is 6 minutes behind clock time. When Daylight Savings Time is in effect, clock time is one hour ahead of solar time.

This graph* depicts the equation of time; there are just four times each year, when solar time corresponds with clock time. 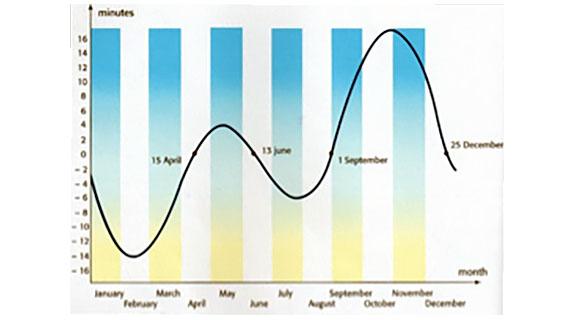 The apparent path of the Sun from the Earth's surface is susceptible to analysis, but complex. For example, the path of the shadow of the tip of stick such as those used by my father from time to time is:

Here φ is the shadow's latitude, and δ the declination of the Sun on a given day.

*Graph from Sundials, Design, Construction, & Use, by Denis Savoire