The 2021 Diversity Programs in Engineering (DPE) Awards have been announced by Cornell Engineering, honoring the students, faculty and staff who have shown dedication to building and sustaining a community that outwardly embodies achievement, thoughtful leadership, empathy and belonging.

The annual awards did not include a banquet this year because of the pandemic, but awardees were honored through the DPE website, which details how each recipient not only thrived, but inspired others during an academic year like none other.

“I have a particular appreciation for this year’s award recipients, nominees and volunteers,” said Jami P. Joyner, director of Diversity Programs in Engineering, “because as we collectively endured uniquely unpredictable challenges, these individuals – despite or even inspired by our circumstances – continued enhancing the college’s climate, advancing inclusivity and cultivating belonging.”

Among this year’s signature award winners was Chinasa Okolo, a computer science doctoral student who was named Graduate Student of the Year for her efforts to improve participation in STEM from undergraduates and high-school students. These included discussions and panels for the Association of Computer Science Undergraduates Research Night, the Cornell Undergraduate Research Board Grad Student Workshop Series, Cornell New Visions Engineering Program, and initiatives to promote entrepreneurship. Okolo also led inclusion efforts for doctoral admissions in computer science, contributing to an increase in applications and enrollment from diverse student populations.

“As someone who benefited heavily from outreach programs throughout my childhood and adolescence, I have an innate need to give back, especially in areas where certain groups like Black people and women have been historically marginalized,” Okolo said. “Being exposed to computer science and entrepreneurship relatively early in my life helped shape my path to success and fueled my curiosity. I've seen the power that both of these fields have in radically transforming lives and believe that every person, no matter their background, should have access to such opportunity.”

Other Student of the Year Awards and awardees include:

Among this year’s Commitment to Diversity Award winners was Amal El-Ghazaly, assistant professor of electrical and computer engineering, who received the Zellman Warhaft Faculty Commitment to Diversity Award for her efforts that included introducing over 70 high-school girls to engineering through the CURIE Academy, mentoring students with an interest in research from the Louis Stokes Alliance for Minority Participation program, and assisting new doctoral students in their transition to Cornell with the goal of strengthening the community and increasing retention for students from underrepresented minority groups.

“I find that regardless of age, it's always difficult for us humans to break into a new sphere of society, venture into a new field, or embark on a new phase of our life journey,” El-Ghazaly said. “It's never easy, but having mentors makes it easier. The problem is that it’s also difficult to form those mentorship relationships. Knowing that, I prefer that I reach out to students, break the initial ice, and make them feel comfortable and competent so that they can continue on in their journey with or without me.”

El-Ghazaly praised DPE for its central role connecting engineering students to potential mentors, and for helping students throughout their higher education experience.

“While it’s important to bring in new talent from all backgrounds, we need to remember to also provide the continual support these students need until they can feel independent and confident in their own pursuits,” El-Ghazaly said.

The Richard Allmendinger Staff Commitment to Diversity Award was given to Joe Rowe, director of administration for the School of Civil and Environmental Engineering, for his effort to unite the community and host open dialogs in the wake of George Floyd’s murder.

“This past year we all saw a visible outcry for racial and social justice in our country,” Rowe said. “This opened the door of opportunity for the Cornell Engineering community to come together and have meaningful discussions about diversity, equity, inclusion and belonging (DEIB). The outcome has increased understanding through sharing many perspectives and the opportunity to learn from each other. I personally have felt more energized and hopeful. Courageous conversations about DEIB must continue to help build individual and team relationships that are necessary for action toward sustainable change.”

Rowe was also honored for his work in helping to organize the CATALYST Academy in 2017 and the CURIE Academy in 2018, introducing over 90 high-school students to engineering.

Among DPE’s other signature awards and awardees were:

To view all of the awards and recipients, including participation awards, distinguished volunteers, and DPE student coordinators, visit the 2021 Diversity Programs in Engineering (DPE) Awards website.

“The 2021 DPE Awards and recipients, especially our Commitment to Diversity student, faculty, and staff awardees, exemplify our engineering community’s excellence and fortitude in face of adversity, social inequities, and unprecedented ambiguity,” Joyner said. “When reviewing the nomination narratives, I am amazed and honored to work, collaborate with, and serve such remarkable and inspiring individuals who selflessly surpass their personal spheres to positively impact the experiences of others in the college and beyond.”

Northwest heat wave ‘should not have been possible’

After stifling temperatures parked over the Pacific Northwest in late June, scientists – including Cornell’s Flavio Lehner – said climate change triggered it. Read more about Northwest heat wave ‘should not have been possible’ 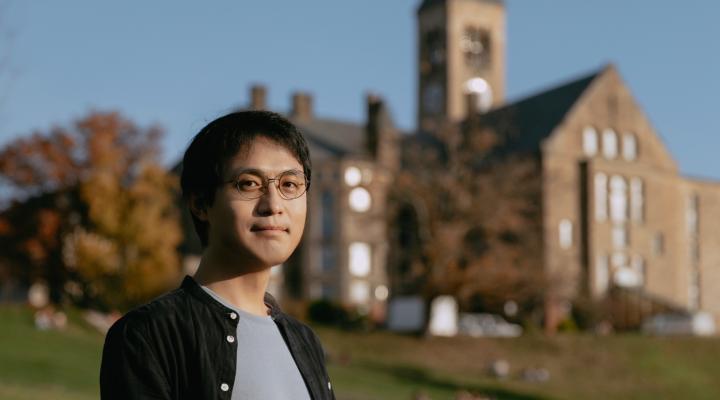