Graduate students come to Cornell Engineering for it's world-class faculty and research facilities. Fellowships get them in the door–and enable them to stay.

Juan Gomez had one semester to go until he earned a Ph.D. in mechanical and aerospace engineering at Cornell. Then he ran out of money to pay for school.

Asking his parents for financial help was not an option. The child of a seamstress and a subcontractor who had emigrated from Colombia, Gomez grew up in a two-bedroom, government-subsidized apartment with seven relatives. He was the first in his family to graduate from college. He had paid the yearly $60,000 Ph.D. bill with fellowships, scholarships and by working during his spare time as a teaching assistant.

As his last semester approached, he looked for additional TA positions. No luck. He asked the Graduate School, the Sibley School of Mechanical and Aerospace Engineering and his adviser for funding. But they were under financial stress as well.

“I was very worried,” Gomez says. “I wasn’t sure what would happen to me for that semester.” He began planning to take a leave of absence and move back home with his parents.

Two weeks before the semester began, the college awarded Gomez a John C. ’48 and Jane B. Colman Graduate Fellowship. It paid for tuition and living expenses, allowing him to finish his research in the Laboratory for Intelligent Machine Systems in the modeling and simulation of unsteady aerodynamics in flapping wings. Gomez earned his Ph.D. in August 2015.

“I cannot properly express in words my gratitude for receiving aid from the Colman Fund… Your generosity in supporting graduate education is immeasurable to our college. From the sincerest part of my heart, thank you,” Gomez wrote to his benefactors.

Gomez is not a singular case. Most graduate students depend on fellowships to fund their education. Cornell Engineering has been aggressively providing as much funding as it can to lure the best students to Cornell and enable them to stay. “The good news is we’re incredibly strong and we have an incredible reputation, so we get the best students,” said June Losurdo, interim assistant dean, Cornell Engineering Alumni Affairs and Development. “But the recruitment environment is becoming more competitive than ever.”

The college is now looking especially to individual donors to provide this crucial funding, Losurdo said. “I want people to realize they can have impact at many different levels,” she said. Over five years, $100,000 funds a graduate award; $1.5 million supports a graduate fellowship; and $5 million funds three fellowships.

Johnny Fung ’81, M.Eng. ’82, and his wife, Juliana, answered the need in 2012 by endowing the J & J Fung Fund for doctoral candidates in Operations Research and Information Engineering (ORIE) with a commitment of $250,000 plus challenge funds of $83,334 from the Tang Challenge, sponsored by Martin Tang ’70. (The Fungs also endowed an undergraduate scholarship fund, the Fung Family Scholarship, in ORIE with $175,000, plus $40,000 in challenge match funds.) Fung sponsored students in ORIE—his major—because it touches on a wide range of other disciplines. “A lot of the things that I learned at Cornell are the foundation of my success. So I started to think about giving back to Cornell and the larger community as well,” Fung said. 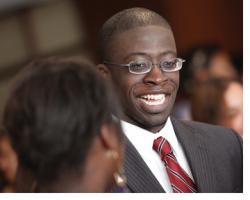 Kenneth Lyons, Jr. chose Cornell over Harvard in 2011, in part thanks to a fellowship. Harvard offered a good financial aid package, but required that Lyons TA his first year. In contrast, Cornell offered the Morehouse College graduate a Sloan Fellowship that covered three years of stipend, tuition and health insurance totaling roughly $66,000 a year; and no TA requirement for the first year.

That funding, plus a welcoming e-mail from advisor Chekesha Liddell Watson, associate professor of materials science and engineering, and a visit to the college’s top-notch research facilities, made Cornell feel like home to Lyons. “Not having to worry about money allowed me to really look at programs that were the right fit for me,” he said.

When it comes to TAing, fellowships literally buy graduate students time. Not having to TA means a graduate student can spend 15 to 20 hours more per week in the lab and classroom. That buffer allowed Sloan Fellow Jade Noble to successfully transition from her undergrad major, chemical physics, to her graduate area of chemical engineering. “That additional time was a godsend for me,” said Noble.

Fellowships sponsored by corporations also offer the chance to work on real-world problems. “Industry fellowships come with a context,” says Lyden Archer, James A. Friend Family Distinguished Professor of Engineering, and William C. Hooey Director of the School of Chemical and Biomolecular Engineering. A Corning Inc. grant is giving graduate student Zhengyuan Tu the opportunity to not only work with novel materials, but also do basic engineering research—designing nanostructured membranes for energy storage—that is likely to launch his career as an academic, Archer said.

Prior to the grant, theoretical research done in France suggested that if membranes in batteries could be engineered with regular nanoporous features, they could store three to 10 times the energy of batteries that we use today. “We wanted to validate that prediction,” Archer said. So he and Tu created an experimental design that used alumina membranes with regular pores in the range of 10 nanometers to 200 nanometers to create electrolytes with high ionic conductivity and mechanical modulus. “These nanoporous membranes were quite brittle and too expensive for the ultimate applications, but for research we thought that was a good place to start,” Archer said. The experiment worked, and they proved the prediction correct.

In 2014 Corning gave them a grant for $50,000, which New York State matched with an additional $50,000. With the funding, Archer and Tu have been looking into lower-cost systems using fused silicon particles created by Corning engineers. The particles give Archer and Tu materials that are easier to manufacture and modify than alumina, and the opportunity to do straightforward surface chemistry to challenge their models even further.

The research also gives Tu, who hopes to become a professor, a leg up on his academic career, Archer said. Students often believe that basic research must be divorced from technology, but engineers can often solve real-world problems by asking focused theoretical questions, Archer said, and this is the case with Tu. “He can take this philosophy forward. Big questions usually require very deep thought and fundamental solutions and this relationship is really important as we advance engineering research.”

Fellowships also offer opportunities for professional development. Corning Fellows meet with a Corning scientist at least once a quarter to answer the students’ questions about working in industry. Sloan and Colman Fellowships offer mentoring, seminars and networking events on such topics as how to communicate academic research to the public. Through the Sloan Fellowship, Jade Noble, who studies cryo-electron tomography of 3-D soft materials, has talked with engineering Ph.D.s about potential careers from law to startup companies. “That has given me a better sense of the opportunities available to me after graduating and has helped me identify which career paths are most suitable for me,” Noble says.

Industry partners also teach students about such critical areas as intellectual property and technology transfer agreements, Archer said. Students can go through an entire Ph.D. program and still lack first-hand understanding of what constitutes intellectual property, how to protect it and how to negotiate for rights when multiple parties are involved. “It’s a big deal when students come out of a graduate program not just trained in the ability to execute cutting-edge research but also aware that the value of their approach and innovations can be quantified and protected in the form of intellectual property,” Archer said.

On the flip side, fellowships give corporations, with a relatively modest investment, access to sharp students who approach problems in creative ways. For example, the Verizon Foundation funded a 2010 grant that established several masters-level projects to explore how the telecommunications giant Verizon Wireless could operate more sustainably.

With the grant and subsequent Verizon Foundation funding, Jeff Tester, the Croll Professor of Sustainable Energy Systems, and his graduate students began researching efficient alternatives to cool equipment in cellphone towers. Verizon currently controls the climate in towers with wall-mounted air conditioners, similar to those used in homes, powered by retail-priced electricity.

The group began looking into geothermal pumps. “We knew a little bit about heat pumps, but not very much, to tell you the truth,” Tester said. The seed money was enough to fund graduate student Koenraad Beckers, who with other students tested various models and assisted with the design and construction of a fully-equipped, hybrid geothermal heat pump system for a cellphone tower at the edge of Cornell Plantations.

Preliminary results show that using the geothermal heat pumps can save up to 50 percent of electricity with respect to the current system. Combined with the exceptional reliability of the heats pumps, this can translate into significant operational-cost savings for Verizon, Tester said.

Along the way the Tester group also made strides in understanding the basic science behind the applications. Industry practices had been based on what worked well, without an understanding of the fundamental science—what Tester refers to as the “cook-and-look method.” He explains that “in our work, we adopted a more fundamental approach using all the tools we could to improve our understanding of heat pump performance for this application.”

For example, Beckers delved into geology and geophysics to do seismic surveys, a thermal response test and rock sample analysis of the area under the cell tower. “Working closely in this multi-disciplinary project with academic experts, industry representatives and public partners has taught me valuable lessons on how many real-life engineering projects are executed,” Beckers said.

Graduate students aren’t the only ones to benefit from fellowships. The college itself comes out ahead, Archer said. “It is crystal clear that the universities that do better than us in the college-level rankings are doing more industry-sponsored research than we do,” he said. And fellowships are becoming even more important as federal research funding continues to decline, Tester said. “Having leverage with this kind of fellowship support to go into new research areas is incredibly powerful. It doesn’t even have to be an awful lot of money,” he added.

The ripple-effect of fellowships spreads even further to contribute to the betterment of society, some students say.

Juan Gomez plans to use his aerodynamics research in developing countries, perhaps in experimental wind turbines and energy harvesting technology, as a way to give back the support he has received. He sees his academic pursuits as a vehicle for outreach, he said. “I just want to use my abilities and skill sets and everything I’ve learned here to help as many people as I possibly can.”