Cornell at the frontier of biomolecular engineering from its very beginning. 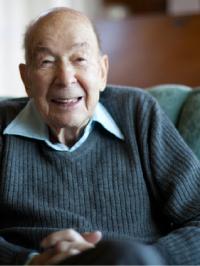 When emeritus professor Bob Finn matriculated at Cornell’s new School of Chemical Engineering in 1937, developing a process for manufacturing a vitamin, drug, or enzyme usually involved finding its chemical structure and then figuring out how to synthesize it. But even then, the founding director of the school, F.H. “Dusty” Rhodes, had an inkling that there would be a growing role for engineers that knew some biology, and he let promising students, including Finn, substitute some microbiology courses for their chemical engineering requirements.

That background proved quite useful to Finn after he graduated in 1942 and went to work at Merck. The United States had recently entered World War II and the pharmaceutical company was part of an unprecedented collaboration between government, industry, and academia to quickly ramp up production of penicillin. The new drug, discovered by British researchers, had the potential to save millions of lives, but first it had to be mass-produced—from a mold grown in fermentation tanks.

It was the dawn of a new era in chemical engineering, one in which the production of biomolecules would increasingly be done by microorganisms, and later tissue cultures of living cells. “The world was turned upside down by antibiotics,” says Finn. “It made true believers that there are some things that chemists cannot do. Living organisms can do it cheaper.”

Finn was paired up with a microbiologist for the penicillin project. While his biology coursework at Cornell gave him a leg up on some of the other engineers, Merck still wouldn’t let him near the fermentation tanks. “They knew we’d contaminate the whole doggone business,” says Finn. “It was a touchy business in those days. It wasn’t at all sure that anybody could so change the fermentation industry as to allow pure cultures of aerobic bacteria or molds or yeast.”

Instead, Finn worked on purifying the “gunk” that was harvested from the tanks using liquid-liquid extraction. “You got this penicillin in a broth and you want a crystalline product in the end,” he explains.
Merck was still working on the purification problem when Finn decided to enroll in graduate school at the University of Minnesota in 1946, where he minored in microbiology. “Most of us engineers at Merck realized that there were engineering problems in the fermentation,” say Finn.

By the time Finn had his Ph.D., the Korean War had just ended and the U.S. economy was in recession, so he followed his professor who went to head the biology department at the University of Illinois. “I couldn’t get a job in industry. I wanted to work; I wasn’t planning to be a professor,” says Finn. “I went down there and spent six years as assistant professor. And this is where I started teaching a course. We called it ‘Biochemical Engineering.’”

At the time, Finn was one of just a handful of academic chemical engineers in the country doing this kind of work, but he soon had company. “Biotechnology was a brand new thing,” he says. “All of a sudden we found out that, ‘Hey,’ these bugs could not only make penicillin and streptomycin, but they could make a whole lot of other products.”

By 1955, Finn had investigated continuous fermentation techniques and was finishing up a critical review of aerations and agitation that was published in Microbiological Reviews when he got a call from Rhodes’ successor, Chuck Winding.

“He said to me, ‘Would you like to come back to Cornell and be a teacher here?’” says Finn. “I accepted the job on the phone.”

Finn’s return marked the beginning of more than 50 years of continuous research at Cornell in what, with the discovery of DNA, would become known as biomolecular engineering. One area Finn explored was measuring the cell damage caused by aeration. “We made it more quantitative to characterize the shear damage that was caused by various types of impellers,” he says. “That still is more of an art than a science. It’s so complex.”

Finn also branched off into waste treatment, especially chemical waste, developing a patented process for treating wastes low in nitrogen with bacteria that fix nitrogen from the atmosphere. “My process has been used in Belgium for this. It’s used to treat certain types of food waste, even from the wine industry,” he says. “You can discharge the whole thing; you don’t have any sludge. It’s a highly aerobic process for special waste.”

On the hunt for useful microbes, Finn sampled soil all over campus. “We found some bacteria out here in Wee Stinky Creek by Barnes Hall,” he recalls. “They would grow on methanol—wood alcohol—that’s kinda poisonous to most things. They couldn’t grow on anything else.”

Finn wondered where these bacteria were finding methanol in dirt and thought of pectin, found in the skin of many fruits. It turned out that the bacteria made an enzyme that could release methanol from pectin methyl esterase. Finn found that these methanol bacteria made an interesting polymer, similar to xanthan gum, the product of another bacteria. Marketed commercially as Kelzan since 1968, the gum is used to thicken everything from salad dressing to concrete. Large quantities are used to fortify the drilling mud used to push the last recoverable oil from wells. Finn figured his biopolymer could be used the same way.

“You could have a fermentation out on the oil field and make your own stuff right on site and pump it down in. We’re talking a lot of gallons,” he says. “This would be a cheap way—because it wouldn’t be so contaminated if all you added was mineral salts and methanol as your fermentation medium.”

Cornell took out a patent and nearly licensed the technology but the deal fell through. While not all of his research was commercially successful—an earlier effort to scale up electrophoresis as a method of separation revealed that it could not work on Earth where gravity gives rise to natural convection currents—Finn’s work continues to have relevance.

“He thought of a lot of problems and did a lot of things before they were ever really popular in the field. Twenty years later people came back and saw they were important,” says Michael Shuler, who joined the School in 1974. “He was one of the first people that did work on shear sensitive cells in bioreactors. He did it with protozoa but it became extremely important when people wanted to use mammalian cells in culture. Bob’s was the only prior work that anybody could look at.”

Shuler, now the James M. and Marsha McCormick Chair of Biomedical Engineering and Samuel B. Eckert Professor of Chemical Engineering, came at a time when Finn—20 years into his career at Cornell—was starting to dabble in what he calls the “new kind” of biotechnology that followed the unraveling of DNA. Now instead of hunting for useful microbes, he could alter them to produce compounds more effectively, or even make completely new products. “He was one of the first ones that did what we call metabolic engineering,” said Shuler. “Bob was a real pioneer in that area as well.”

Shuler followed another new path, growing not independent microorganisms but plant cell tissues capable of producing useful biochemicals. Two of his students, Chris Prince Ph.D. ’91 and Bobby Bringi ’91 ChemE, formed Phyton Biotech to commercialize a process to produce Taxol, an important cancer drug that was first extracted from the bark of the Pacific Yew tree. “It was very scarce, so we developed a process that is based on using yew cells in culture and that process is used commercially by Bristol-Myers Squibb to make all its Taxol,” says Shuler, who advised the company. “That was the first large-scale commercial process based on plant cell culture and it really came from the work and ideas that we developed here.”

Shuler also collaborated with researchers at the Boyce Thompson Institute for Plant Research on using insect cell cultures to make therapeutic recombinant proteins. “There is a cell line which became very, very popular and was used extensively by a lot of people called the High-Five cell line,” he says. “One of the things that’s good about Cornell is you have such a diversity of people working on a wide variety of different topics, it’s possible for someone in engineering to interact with people that have real expertise with other systems. The graduate field system kind of promotes that.”

Over time, Shuler’s interest turned toward biomedical engineering, such as treating brain tumors, investigating cancer metastasis through blood cells, and using the techniques of nanofabrication to build scaffolds for tissue engineering. “We’ve invented a body-on-a-chip which is to try to predict the response of the body to new drugs or combinations of drugs or potentially to chemicals which might be toxic,” he says.

But the distinctions between biochemical, bioprocess, and biomedical engineering have blurred, says Shuler, in part because many of the same techniques are used. “If I’m interested in tissue engineering, I can use it in the context of making a chemical, testing how the body is going to respond to the chemical, or to potentially make replacement parts for the body. So it’s a spectrum,” he says. “The term biomolecular engineering really says that what we’re interested in is understanding the biology at the cellular and molecular level and then using that in terms of processes, typically involving chemical change, and those could be ones that have medical implications, or impacts on bioprocesses to make something like pharmaceuticals, or it could have an impact on things like waste water treatment.”

As scientists fill in the picture of how molecules interact to perform the functions of life, engineers are manipulating them more rationally and effectively. For Associate Professor Matt DeLisa, cells are filled with useful molecular machines all with millions of moving parts known as proteins. By swapping in parts from other organisms, he is working to engineer supercharged cells that can produce treatments for Alzheimer’s, cancer, and autoimmune diseases. “One of the most important types of therapeutic proteins that we have an eye toward making are glycoproteins,” he says. “A glycoprotein, just like a regular protein, is made of amino acids but it’s then further modified with complex sugar structures. These sugars are attached to many proteins and this attachment turns out to be very important in terms of drug development.”

By inserting human genes into E. coli, DeLisa can give this simple organism the machinery to attach different sugars to proteins, giving them specific biological actions. He has co-founded Glycobia, Inc. to commercialize the process. “We bring in the entire protein machinery for sugar biosynthesis and attachment and give E. coli the ability to perform glycosylation, something it does not normally do,” he says. “It’s a very bottom-up engineering approach that is made possible by a deep understanding of the underlying biological mechanism.”
Such a mechanistic understanding of biomolecules raises the prospect of computational models that can not only show how to make a protein that might not exist in nature, but also predict its effect. Assistant Professor Jeffrey Varner is already developing such tools to rationally reprogram cell machinery. “Our ability to make accurate predictions is still in its infancy,” says Shuler. “In 40 years we’ll be able to make much more accurate predictions.”

It may one day even be possible to tailor make entire microorganisms from scratch. “That’s not an impossibility and in fact in some sense is probably closer than many people realize,” says Shuler. “The idea in both of these cases is to have a human-designed organism fulfill a predetermined task as efficiently and effectively as possible.”
Creating such artificial life forms presents a host of technical challenges, not to mention philosophical questions, so most chemical engineers will continue to work with modified cells for the foreseeable future. What biomolecules they will create is anyone’s guess. “There are still all sorts of things to be learned. It’s hard to imagine what the next use of living organisms will be,” says Finn. “So, you know, we’re just getting started.”