Lynden Archer has always been scientifically inquisitive, although his first experiment was quite different from the work he does today. As a ten-year-old boy in Guyana, South America, Archer was an avid reader of Chemistry books. He had read a story about the wonders of brewer’s yeast as a dietary supplement and had a hunch–what if he fed a portion of his mother's flock of chickens a diet reinforced with brewer's yeast? His mother, perhaps seeing the spark of scientific genius in her son, let him experiment away on her poultry. 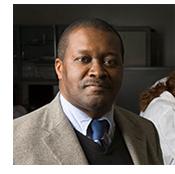 “The experiment actually turned out pretty well,” says Archer. “My mother commented that they were healthier, bigger, and tasted better, and that little bit of a compliment, for a kid, goes a long way. So that was the first concrete lesson I had in input, influence, output, in a reliable way.”

Much has changed for Archer since those early days. Today, he serves as director of the School of Chemical and Biomolecular Engineering at Cornell Engineering and co-director of the KAUST-Cornell Center for Energy and Sustainability. He is actively pursuing basic research into a novel nanomaterials technology that has birthed an expanding start-up company, NOHMs Technologies, and that last year earned him an award for Special Creativity from the National Science Foundation, Division of Materials Research. His curiosity remains as vibrant as it was decades ago, and it continues to drive his research on novel nanomaterials.

Archer studied chemical engineering with a focus on polymers first at the University of Southern California, then as a doctoral student at Stanford University, and finally as a postdoctoral member of the technical staff at AT&T Bell Labs. While studying for a qualifying exam, he stumbled across the topic of tethered polymers–chain-like molecules attached to surfaces-which drew him to investigate polymer structure and motions near surfaces. "It stuck with me," he said. "It became something of a passion." Little was known about polymer mobility at solid-liquid interfaces at the time, and this unknown territory attracted Archer. In 2000, he joined Cornell Engineering as an associate professor of chemical engineering. He quickly established what has now become more than a decade-long friendship and productive collaboration with materials science and engineering Professor Emmanuel Giannelis. Archer recalled his first meeting with Giannelis–before deciding to come to Cornell-with a smile: "Emmanuel had just published an important paper on clay-based nanocomposites, (composites made up of inorganic clay mineral particles physically mixed with polymers), and had an interesting theory for the properties of the materials that explained many aspects of what we knew about nanocomposites, but one of the key assumptions was inconsistent with my intuition based on knowledge of how polymer molecules move near rigid surfaces...I wanted to know whether this intuition was right and what factors might be at work in its failure to describe clay-based polymer nanocomposite materials. I came up with a physical model system to test my hypothesis; that's where the germ of the materials platform that ultimately became NOHMs started," says Archer.

Archer and his students Qiang Zhang and Venkat Minikanti began experimenting with nanocomposites created by attaching organic polymers to spherical inorganic nanoparticle cores-like spokes from the hub of a wheel, or rays from a star. They reasoned that by making the molecular spokes dense enough it should be possible to simultaneously limit particle-particle contacts and prevent physical adsorption of polymer molecules on the nanoparticle surfaces; allowing two of the major determinants of a nanocomposite material's properties to be isolated and studied. "We quickly discovered that unlike physical mixtures of nanoparticles and polymers, which spontaneously segregate into coarse particle-rich and particle-depleted phases, the hairy particles exhibited remarkable colloidal stability for extended periods of time," Archer said.  A consequence is that upon addition of the particles to a polymer host to create a nanocomposite, none of the typical enhancements in mechanical properties reported in physical mixtures of nanoparticles and polymers are observed. "This told us that contrary to conventional wisdom at the time, the forces communicated through particle-particle contacts and sustained by the slow motions of adsorbed polymers confined between the particles that mediate these contacts, play the crucial role in setting the properties of a nanocomposite material," Archer says.

The realization that the hairy particles at the heart of their studies were fundamentally interesting came a few years later; after a postdoctoral scientist in the Giannelis group made the discovery that similar particles created by ionically linking molecules and short polymers to inorganic structures exhibited fluidity in the absence of a solvent. A flurry of collaborative studies prompted by this finding showed that the Zhang particles created by covalent attachment of polymers had the same ability to exist asself-suspended suspensions, leading to current understanding that the behavior is a characteristic of any sufficiently well grafted nanoparticle. It means that whether the linkage between the organic and inorganic phases is ionic or covalent, every nanoparticle making up the suspension is itself a nanocomposite. Archer’s current approach for building macroscopic nanoscale organic hybrid materials (NOHMs) one nanoparticle building block at a time was thus born. This simple conceptual breakthrough lead to various incarnations of the materials, including ionically conductive NOHMs based on ionic liquids tethered to nanoparticles, which remarkably show no melting transition. According to Archer: “The power of NOHMs is that one can now conceive and easily assemble novel organic-inorganic hybrid materials with any desired set of physical properties by taking advantage of the vast library of inorganic nanoparticle core chemistries, sizes, and shapes that already exist and the as vast set of organic ligands, (polymers, ionic liquids, surfactants, and mixtures of any of these materials), that can be tethered to the nanoparticle cores to create nanocomposite building blocks appropriate for meeting a particular need.”

The Archer group has experimented with a wide range of different core and corona materials for NOHMs. These combinations led to Archer’s personal favorite application – creating porous-like interstitial channels that allow material to travel to the core of the particle. "I realized that I could do chemistry on the surface of the core particle that would become internalized into the pore spaces between particles once the NOHMs form." said Archer. "Thus, if we use the materials as electrolytes in a battery, it is possible to regulate the rate at which ions flow from the anode to the cathode by the chemistry done on the outside of the particles." This particular application gave birth to the spin-off startup company NOHMS Technology.

“I do not consider myself an electrochemist or batteries jock, I’m in fact as passionate about the nanoparticle-tethered polymers that make it all work”, said Archer. But a series of very able graduate students (David Lou, Zichao Yang, Jennifer Schaefer, Yingying Liu) and postdoctoral scientists (Surya Moganty and Jay Navaneedhakrishan) in his lab helped him understand the promise of NOHMs for enabling batteries that offer three to ten times the energy storage capacity of today’s state-of-the-art lithium-ion batteries. “Archer is very inspiring,” said Yang. “He comes up with many ideas quickly and finds ways to overcome problems and arrive at answers quickly.” With Archer’s scientific guidance, NOHMS Technology opted to tackle lithium-sulfur batteries (Li-S) for cell phones and other uses. They selected this material because sulfur is sourced from coal. “If one could make a battery, which is a clean, green technology--that diverts a “dirty” source material from a less beneficial contemporary use [[combustion]]-that would be a really cool thing to do. That was the genesis of that thought," Archer said. It also helped that the material is cheap and abundant in the U.S. Archer and his team also brought original ideas from their polymer physics tool set that helped overcome fundamental limitations with Li-S battery technology, which has led to a core set of intellectual property. NOHMS had a design in place, put it into practice, and it worked.

Martin Teschl, who works with Archer as the technology commercialization and liaison officer at the Cornell Center for Technology, Enterprise, and Commercialization (CCTEC), believes the company has a clever approach to making it in the market. “Their strategy is a wise one,” he said. “They don’t want to be a battery manufacturer, which requires a lot of capital, so they focus on the materials part of it, and supply to battery companies, which makes them more flexible. They can then do this on a smaller scale, address smaller niche applications, and it doesn't require a lot of up start up.”

“Today even skeptics in the field will tell you that the results that we’ve obtained in Li-S battery are still the best in the world in terms of their performance,” said Archer. The company not only benefits from NOHMS’ electrolytes’ improved efficiency, but also from the fact that the material increases the safety of the batteries dramatically, (current lithium-ion batteries tend to be flammable).

While the spin-off company is focusing on LI-S batteries, members of Archer’s lab are investigating the potential of the more complicated lithium-oxygen and lithium-CO2 batteries. “I anticipate in the next decade or so, one of these two technologies will probably be ready,” said Archer.

Since NOHMS Technologies’ initial success, the company has grown and evolved, leaving Ithaca to take root in two different locations, Rochester, N.Y. and Lexington, Ky. Moganty, Navaneedhakrishan, and Yang, who started in Archer’s lab at Cornell, have all since moved on to work for NOHMS Technologies in various research capacities. The transition from academia to a commercial company “opens one to a lot of new challenges,” says Yang, but has proved exciting. He and his fellow engineers are working on “materials which will make batteries last much longer, weigh much less, and have extended lifespan.” These efforts have caught the attention of many federal agencies, including the U.S. Air Force and the Defense Advanced Research Projects Agency, with projects to create mobile batteries and remote charging units. The company is also in talks to develop materials for military radios and cell phones. “The final frontier is, of course, batteries for electric vehicles,” said Nathan Ball, the company’s CEO. “We’ve gotten some support and interest from one of the top three electric vehicle battery companies.”

Archer’s goals for his research are pretty basic. “I want to understand NOHMs, period,” he says. “We have vignettes of what they are, what they do. But I want to understand where they belong. When I say the word ‘polymers,’ even persons without a detailed understanding of what they are generally understand what a polymer is, they have a feeling for that-they know they're in a rubber band, and so on. When I say 'NOHMs' people ask, what are those?  So that is a goal for my lab-to fundamentally understand NOHMs so we can rigorously position these exciting materials alongside other technological giants such as polymers and colloids that dominate today's materials landscape."

On the applications side, Archer notes that while they have a library of physical characteristics they can select from when designing NOHMs, the process lacks a ‘design rule.' His hope would be to emulate what’s known as the Dow Chemical six-day plan, in which a client can tell the chemical engineering giant that they want a novel polymer-based product with certain characteristics, and in a short six days Dow can tell that client what polymer to use and how to manufacture it. “There’s a lot of understanding, a lot of data, a lot of experience that has been built up, and the ability to design across materials chemistries,” Archer said. “That is where we want to get to.”

“His group has developed a material that has truly changed the industry,” says Ball. “We’re not working on something that’s an incremental change. It's truly a huge leap."